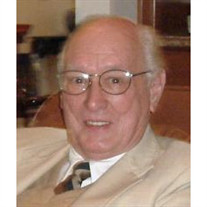 Melvin “Mel” Henry Mull passed away on November 21, 2015, at the age of 87. He was a long- time resident of Toledo, Ohio. He is survived by his brother, Larry Mull; children, Sandra “Sam” Elaine Mull, John Christian Mull, and Beth Anne Posey (Mull); grandchildren, Melissa Mull, Michael Mull, and Quinn Nameche and 3 great-grandchildren. He was preceded in death by his parents, Lawrence Valentine Mull and Ellen (Eicher) Mull. As a youth he lived in the Bancroft Hills neighborhood where he later attended DeVilbiss High School. Like many young men of that time he was eager to join the War effort. He attended summer school to finish high in three years. Upon graduation in 1945, at the age of 17, he signed up for the Merchant Marines by parental consent. As a youth having worked summers at a family farm he was the ideal recruit to work on a cattle boat bringing livestock to Italy as part of the War relief effort. The positive experience stayed with him the rest of his life. Upon his return to the U.S. he studied at the University of Cincinnati, where he graduated with a degree in Architecture. Finally settling in Toledo he made his home in the Historic Old West End where he raised his three children as a single parent for five years. He was actively involved in neighborhood projects including the founding of the Agnes Reynolds Jackson Arboretum. Mel worked for several architectural firms before eventually founding his own firm in 1966. In his postretirement he worked as an instructor at Owens College teaching Architectural Design. He was pleased to share his lifetime knowledge of Architecture. Mel Mull was passionate about his profession, as an architect he loved to design and construct the best functional buildings possible. Many new, and many were remodeled or reinvented. He stayed true to the materials and form in new buildings, and he revered the beauty in older structures. As a loving father he shared his eye of observation, his willingness to view things openly, and to challenge the normal and embrace the inner creativity we have inside us. He lived his beliefs by example and hard work. Even in his later years he took joy in sketching art with a narrative for his caregivers. Mel believed in making the world a better place. A memorial service will be held on Sunday, December 13th, at 1 p.m., in the Ansberg-West Funeral Home, 3000 Sylvania Avenue, (between Secor and Douglas Roads). Online condolences may be sent to the family at www.ansberg-west.com

The family of Melvin Henry Mull created this Life Tributes page to make it easy to share your memories.