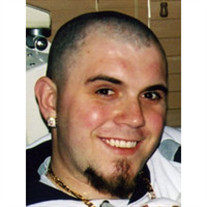 Micheal Paul Syroka, 30, passed away peacefully, Friday, August, 2010 at his home. Born to Michael A. DiStefano, Sr. and Shelley Syroka on Oct. 27, 1979. Micheal was the most loving, giving, caring man ever. His heart was as big as the universe! When he loved someone, he loved them with every inch of his body and soul. To truly know him was to love him. Micheal was an extremely talented athlete, playing golf, tennis, softball, basketball and football, winning awards in all! His football career was his pinnacle, receiving over 83 scholarships. He attended St. Pats and St. Francis. He was a life long Yankee fan, going out as a champion! He enjoyed inventing, outdoors, photography, writing and being with friends and family. Micheal?'s pride and joy was his family. He loved and cherished each of you deeply and completely. His mother Shelley, Grandpy Howard and Uncle Paulie were his hero?'s. Micheal loved his uncle Paulie and the Syroka family so much that he took his middle name and changed his last name. Micheal?'s days were spent in the joyous fatherhood to Oliana and his passion to be a husband to Sarah. He is survived by his loving mother Shelley Syroka; his loving future wife Sarah Downey and his beautiful little baby girl Oliana Kaiya Syroka, his loving grandmother Audrey Syroka, and numerous Syroka uncles, aunts and cousins. Also his paternal grandparents Billie Hymore and Andy DiStefano, half-brother Tony, one aunt and cousins. A heartfelt acknowledgment to Nick Brinkman and Micheal?'s friends. Micheal was preceded in death by his father Michael DiStefano, Sr., uncle Mark DiStefano, aunt Jackie DiStefano. (His hero) Grampy Howard J. Syroka and grandparents, Ben and Lucille Jackowski. The Mass of the Resurrection will be celebrated 11 AM Friday at St. Adalbert Church, with prayers beginning at 10 a.m., from the funeral home. The family will receive friends from 2-9 PM Thursday at the Ansberg-West Funeral Home, 3000 Sylvania Avenue where wake services will begin at 7 PM followed by an open ?“mike?” to share memories. Contributions, in memory of Micheal, may be made to the Oliana Syroka Memorial Fund, at any Fifth Third Bank, c/o Sarah Downey. May God bless you and wrap his loving arms around you. We will always love you and miss you. Love , Your Family

Micheal Paul Syroka, 30, passed away peacefully, Friday, August, 2010 at his home. Born to Michael A. DiStefano, Sr. and Shelley Syroka on Oct. 27, 1979. Micheal was the most loving, giving, caring man ever. His heart was as big as the universe!... View Obituary & Service Information

The family of Micheal Paul Syroka created this Life Tributes page to make it easy to share your memories.