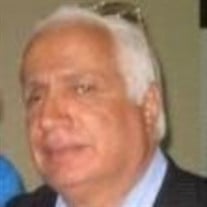 Mohamed Said Kassem, of Sylvania, passed away peacefully on Wednesday, March 11, 2020 at ProMedica Toledo Hospital after a long battle with colon cancer. He was 76. He was surrounded by family and friends, from near and far, in his final days. Mohamed was born in Egypt to Mohamed Ibrahim and Sakina Kassem on July 16, 1943. Mohamed was born on a Friday, which earned him the nickname “Gomaa” (Arabic for Friday). He later became known to many of his friends as “Happy Friday” as his name Said is Arabic for happy. His childhood environment sparked a lifelong interest in politics, religion, and history. In 1967, Mohamed followed his brother Sami to Toledo to pursue his education. He graduated from the University of Toledo with Bachelor’s Degrees in Industrial Engineering and Business. Following college, Mohamed worked at Chrysler, while also translating Arabic documents for new immigrants at the International Institute of Toledo. Mohamed worked hard to provide for his family and refused to take shortcuts. He was devoted to ensuring that all of his interactions with others exhibited honesty, fairness, and integrity. Mohamed’s greatest joy in life was being a father to his children. His world revolved around his family. Educating his children was of the utmost importance to Mohamed, and he tirelessly sacrificed to provide his children with educational opportunities. He ensured that all of his children understood the value of an education, and instilled all of the lessons learned from his struggles and experiences in life in his children. Mohamed taught his children the importance of a strong work ethic by the example he set. He was a great father, friend, and teacher to his children. Mohamed possessed a wealth of knowledge that was apparent to all who met him, even in his final days. He was able to immediately befriend any person he met, regardless of their background. Mohamed would strike up conversations and joke with perfect strangers, and shared a kindness not regularly seen these days. Some of Mohamed’s simpler pleasures in life included driving to Port Clinton to buy as much fish as humanly possible each spring, laughing to his favorite television show M*A*S*H, and reading about politics, religion, history, and the economy. Mohamed was preceded in death by his parents and his brother, Abdu. Surviving are his wife of over 40 years, Mahasen; sons, Ahmad and Osama; daughters, Laura and Sophia; brothers, Tawfik and Sami; sister, Suad; and countless nieces and nephews. Mohamed was laid to rest on Thursday, March 12, 2020 at Toledo Memorial Park in accordance with Islamic rituals. Condolences can be shared with his family at www.ansberg-west.com.

Mohamed Said Kassem, of Sylvania, passed away peacefully on Wednesday, March 11, 2020 at ProMedica Toledo Hospital after a long battle with colon cancer. He was 76. He was surrounded by family and friends, from near and far, in his final days. Mohamed... View Obituary & Service Information

The family of Mohamed Said Kassem created this Life Tributes page to make it easy to share your memories.

Mohamed Said Kassem, of Sylvania, passed away peacefully on Wednesday,...