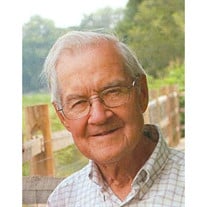 Morgan Porter Wilkins, Sr., 97, of Toledo, passed away on Sunday, July 10, 2016, at UTMCO surrounded by his pastor and loving family. He was born June 4, 1919 in Clarksville, TX to Frances Lucinda (Porter) and Thomas Gaston Wilkins. Morgan was valedictorian of Spring Hill High School, class of 1935, in Spring Hill, TN. In the midst of the depression and with no money to attend college, Morgan worked various jobs until 1941 when he moved to W.VA to work and met the love of his life Agnes Virginia (Wetzel). They married in 1942. Together, they raised six children and shared 73 years of marriage until her passing in 2015. After serving in the US Army during WWII, Morgan moved his family to Toledo in 1947, and started Wilkins Supply Company, a wholesale industrial supply business, which he ran for 40 years. Morgan was very active in his community. Some of the organizations he belonged to include: member and past president of The Toledo Lion’s Club, past president and member of the Toledo Area Small Business Association, member of the American Supply Association, board member of Friendly Center, and board member of Flower Hospital. Morgan gave his life to Jesus Christ at a young age. Just as a stone that is tossed into water produces ripples, such was the life of Morgan Wilkins. A member of Aldersgate United Methodist church for 59 years, lay leader for close to 40 of those years, and a Sunday school teacher for over 70 years, not only did he talk the talk, he walked the walk. He probably never fully knew the ripple effect his example of a life of integrity, faith and Christian principles had on all those he encountered. He was a devoted husband and father who enjoyed fishing, bowling, playing bridge with friends, and playing golf when wintering in Florida. He leaves to cherish his memory his son Porter (Wendy) Wilkins; son Robert (Patricia) Wilkins; daughter Sandy Garvin; daughter Rhonda (Dave) Lahmers; son Terry (Beth) Wilkins; daughter Judy (Mark) Sobanski. 17 grandchildren, 24 great-grandchildren, with 2 more great-grandchildren expected soon; several cousins, nieces and nephews also survive him. He is sharing heavenly glory with his parents; wife, Agnes; brothers Thomas Gaylord Wilkins and Robert Haley Wilkins; sister Frances Elizabeth Wilkins; son-in-law, James Garvin; former daughter-in-law Lora (McGee) Wilkins Keene; and great-granddaughter Presley Marie Wilkins. Visitation will be from 4-8 pm on Friday, July 15, 2016 at the Ansberg-West Funeral Home, 3000 W. Sylvania Ave., Toledo, OH. Funeral services will begin at 11 a.m. Saturday, July 16, 2016 at Aldersgate United Methodist Church, 4030 Douglas Road, Toledo, OH 43613. In lieu of flowers, donations may be made to Aldersgate United Methodist Church. The family wishes to thank the assisted living and rehab unit staffs of Swan Creek, the staff of UTMCO, and Northwest Ohio Hospice for their loving care of Morgan. To send his family online condolences, please visit www.ansberg-west.com.

Morgan Porter Wilkins, Sr., 97, of Toledo, passed away on Sunday, July 10, 2016, at UTMCO surrounded by his pastor and loving family. He was born June 4, 1919 in Clarksville, TX to Frances Lucinda (Porter) and Thomas Gaston Wilkins. Morgan... View Obituary & Service Information

The family of Morgan Porter Wilkins created this Life Tributes page to make it easy to share your memories.