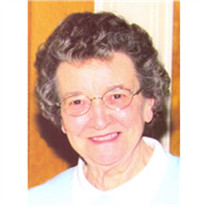 SCHERER Margaret Helen (Lugibihl) Margaret Helen (Lugibihl) Scherer passed away at the age of 83, on July 16, 2009. Margaret was born in Miller City, Ohio, on February 8, 1926. She was the daughter of Ralph and Ruth (Hilty) Lugibihl. Margaret was a 1944 graduate of DeVillbiss High School in Toledo, Ohio and had worked after school for the Wabash Railroad during war time. Following her graduation, she worked for the Ohio Bell Telephone Company. She remained friends with many of her coworkers and high school friends throughout her lifetime. On June 22, 1947, she married Roman (Tom) Scherer following his service in World War II. Margaret became a loving wife and mother and considered her family her most treasured possession. When her four children were young, she was one of the founders of both the Mother's Club and the PTA at the newly - built Elmhurst School. She also enjoyed being a leader of both Cub Scouts and Girl Scouts. She and her husband Tom remained active volunteers throughout their children's school days and accompanied the Start High School Choir on a trip to Poland where they made some wonderful friends and memories. Other volunteer positions that she held were with the American Red Cross, working several years with their blood drives, delivering Meals on Wheels, and conducting tours for The Holidays in the Manor House at Wildwood Preserve. For may years, she worked on election day and enjoyed talking with all the people who came to vote. Margaret's favorite times in life were those when she was with her family whether it was on a camping trip, playing games, gathering for the holidays or having fun at their house on Crystal Lake in Michigan. She always loved animals, especially cats, and enjoyed reading, bowling and playing cards with her friends. Margaret was preceded in death by her son, Mark and her brother, Robert Lugibihl. She will be greatly missed and lovingly remembered by her husband, Roman Thomas; daughters, Connie (John) Schoen, Jenatha (Donald) Boose; son, Michael and daughter-in-law, Teresa Scherer. She also leaves grandchildren, Amy (Sean) Hineline, Angela (Michael) Henry, Aaron (Abbie) Schoen, Stephanie, Kevin and Melanie Boose, Laura (Clinton) Jepkema, Brian, Bradley and Steven Scherer and 6 great-great-grandchildren, Brandon, Jacob and Anna Henry, Tyler and Emily Hineline and Jack Schoen; her sister, Ruth Ann (Richard) McCarbery; niece, Sarah (Dennis) Waggoner, their children, Natalie and Madeline, and nephew, Ryan McCarbery. Friends are invited to visit from 2-8 p.m. on Sunday, July 19, 2009, in the Ansberg-West Funeral Home, 3000 Sylvania Ave., where funeral services will begin at 11 a.m. on Monday. Rev. William Fink Officiant. Interment in Toledo Memorial Park Cemetery. The family requests that donations be made to the Friends of the Library at the Toledo Lucas County Public Library or The Humane Society of Toledo. www.ansberg-west.com

The family of Mrgaret H. Scherer created this Life Tributes page to make it easy to share your memories.