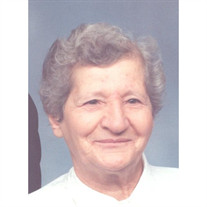 Namora Haddad, 91, went home to be with The Lord Our God on Wednesday, April 16, 2014, at St. Luke’s Hospital in Maumee, Ohio. Namora was born in Aitha El-Foukhar, Lebanon and raised by her grandparents whom she adored, Masaad and Ghasma Ghareeb, after her mother died during childbirth. In 1942, she married Michael Haddad and together they raised five children. The Haddad family immigrated to the United States in 1967, and they have resided in Toledo, Ohio for the past 47 years. Namora was a faithful and active member of St. George Antiochian Orthodox Cathedral and the church’s Ladies Benevolent Society, where she enjoyed cooking for the summer festival and annual fundraising dinner, for nearly half a century. She was an amazing cook whose primary ingredient in everything she prepared for others was love. Parishioners, festival-goers and especially the clergy enjoyed her food and her fellowship tremendously. Her meals would nourish the body, and her kindness and compassion would nourish the soul. Namora always told her children, “in our home, God is first and then family.” Her life and legacy exude those words, as she lived by faith and self-sacrifice was her very nature. She loved her children, grandchildren and great grandchildren beyond measure. She would never hesitate to cook for her family and friends, making the most delicious Lebanese food, and knowing each one’s favorite meal. She enjoyed reciting her own poetry which delighted any audience, crocheting afghans for the whole family, and hosting friends and family on a regular basis. She personified hospitality and generosity, always placing the needs of others before her own. Her smile gave comfort. Her encouragement gave hope, and her humor and wisdom gave cheer and insight into the simple joys of life. Namora was preceded in death by her husband of 60 years, Michael, her infant daughter Asmahan, brothers Michael and Farris, sisters Manira and Sadie, sons-in-law Raoul, Todd, Moufeed and Edward. She is survived by her children Nimra Razouk, Nicholas Haddad, Sabah Mitri, Najah (James) Seaman, Rhonda Hamlin, brothers George and Masaad of Canada, sisters Rose of Lebanon and Zouha of Greece, grandchildren Philip, Michael, Lory, Nadia, Samantha, Najwa, Rema, Joseph, James and Erica, and 16 great grandchildren. Friends are invited to visit on Monday, April 21stfrom 3:00 PM to 8:00 PM at Ansberg-West Funeral Home, 3000 West Sylvania Avenue, Toledo, Ohio 43613, where Trisagion prayers will be held at 7:30 PM. The funeral service will be held on Tuesday, April 22nd at 11:00 AM at St. George Antiochian Orthodox Cathedral, 3754 Woodley Road, Toledo, Ohio 43606. Interment will be held at Ottawa Hills Memorial Park following the service. Those wishing to make donations in Namora’s memory are asked to consider St. George Antiochian Orthodox Cathedral. Mom, as you enter into eternal rest, we gain comfort in knowing that you are now an angel in Heaven just as you were on earth. We will miss you and love you forever. Truly blessed to be your children, Nimra, Nicholas, Sabah, Najah and Rhonda.

Namora Haddad, 91, went home to be with The Lord Our God on Wednesday, April 16, 2014, at St. Luke&#8217;s Hospital in Maumee, Ohio. Namora was born in Aitha El-Foukhar, Lebanon and raised by her grandparents whom she adored, Masaad and Ghasma... View Obituary & Service Information

The family of Namora Haddad created this Life Tributes page to make it easy to share your memories.

Namora Haddad, 91, went home to be with The Lord Our God on Wednesday,...