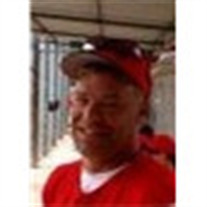 SCHROYER III Oakley The world certainly lost a fine person with a huge zest for life with the passing of Oakley “Oakie” “Ernie” Schroyer III, 51, of Toledo, passed away unexpectedly on Wednesday, April 6, 2016. He was born March 18, 1965, in Toledo and was the son of Oakley and Judith Schroyer. In spite of the crippling effects of diabetes, several bypass surgeries, and breaking his back while cutting concrete, he still went on to excel in more sports than most could ever dream of. Oakie was a star athlete at Whitmer High School…from his days as a football wide receiver to excelling in baseball, he was also one of the best bowlers in the city of Toledo (countless 300s/800s). He continued to play sports after high school (federation baseball, flag football, golf, and bowling). One of his most cherished highlights was being named MVP when the Harry Young Builders baseball team from Toledo won the Roy Hobbs World Series in 1996. He sure loved his Cincinnati Reds and Oakland Raiders, too. Countless friends and family came forward to support him when he needed to raise some money to get reactivated on the organ donor list. He said, “I don’t know how I could ever repay everyone.” Ironically, that event brought a whole lot of his friends back into his life – and back into each others’ lives. Oakie received a call Monday night to pack up and get to the Cleveland Clinic ASAP…there was a kidney and pancreas waiting for him. Unfortunately, complications arose during surgery…God had other plans for him. Friends think Harry Young (who passed away in 2014) is assembling a baseball team in heaven and needed a hard-nosed catcher who could steal a base but go ‘yard’ once in a while. He certainly appreciated all of the love and support he received from his precious partner in life, Shelly (Laraway), along with his family and extended group of friends. Oakie is survived by his girlfriend, Shelly Laraway; father, Oakley Schroyer Sr.; brothers, Lorne Schroyer and Corey (Ashley) Schroyer; nieces, Kiley Schroyer, Courtney Schroyer, Audrey Schroyer and Laney Schroyer; and nephew, Kagen Schroyer. He was preceded in death by his mother, Judy Schroyer and sister, Robin Schroyer. Friends are invited to visit on Monday from 2-8 p.m., at the Ansberg-West Funeral Home, 3000 Sylvania Avenue, (between Secor and Douglas Roads). Funeral services will be held Tuesday at 12 noon, from the funeral home. Interment will follow at Ottawa Hills Memorial Park. The Schroyer family suggests any contributions in memory of Oakie III, go to his longtime girlfriend, Shelly Laraway. Online condolences may be sent to the family at www.ansberg-west.com

The family of Oakley E. Schroyer III created this Life Tributes page to make it easy to share your memories.