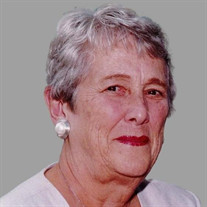 Patricia Harman, “GGP” passed away Sunday March 21, 2021 at her son’s home in Maumee, surrounded by her family. She was born March 13, 1925 to Harold and Beatrice Hasemeyer in Toledo. Patricia was a graduate of Central Catholic High School, Class of 1943 and Marygrove College, Class of 1947. She married Richard Harman in 1947, who preceded her in death in 2011. Patricia was a realtor for Lindsay Realty and worked in the administration offices of the Diocese of Toledo. She enjoyed playing Bridge, Euchre and doing Crossword Puzzles. Patricia is survived by her sons, Richard (Sally), Tim and Kevin (Denise) Harman; daughters, Marcia (Matt) Koehler, Kathleen (Chris) Bogucki; daughter in law, Cindi Harman; 37 grandchildren and spouses; 37 great-grandchildren and cousin, Mary Momsen. In addition to her husband, Richard, she was preceded in death by her son, Hal and brother, Harold Hasemeyer. Special thanks to the staff of Hospice of Northwest Ohio and the caregivers at the Lakes of Monclova. Friends are invited to visit from 3:00pm to 8:00pm Wednesday, March 24 at Ansberg-West Funeral Home, 3000 Sylvania Avenue, where a scripture service will be held at 7:00pm. Mass of the Resurrection will be celebrated 11:00am Thursday, March 25 at Most Blessed Sacrament Church, 2240 Castlewood Drive, where friends are invited to visit after 10:00am. Interment will follow in Calvary Cemetery. Memorial contributions may be made to Hospice of Northwest Ohio.

The family of Patricia A Harman created this Life Tributes page to make it easy to share your memories.