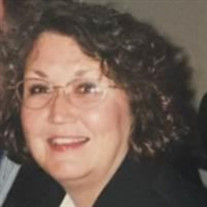 Patricia Anne “Pat” Turner of Sylvania died peacefully on August 12th at Hospice of NW Ohio in Perrysburg. She had been in failing health for the past several weeks. She was the oldest child of Tim and Elaine Dever and was born in Toledo on February 21st, 1947. She attended Blessed Sacrament Elementary School and was a 1965 graduate of Central Catholic High School. She attended the University of Toledo. After high school, she traveled the world with her friends, visiting Ireland, England, Las Vegas and anywhere she could drive in her ‘65 Mustang. She spent her career as an operator for AT&T, formerly Ohio Bell, and was a proud member of the CWA retiring in 1996. In 1979, she met her husband Jim “Jimmy” Turner at The Crow’s Nest in Erie, Michigan. Together they had a son, Rory T. (Meghan) Turner. Pat was gifted at many arts and crafts and in particular needlepoint and crochet. Many family members still use the colorful afghan blankets she knitted them over the years. She was a lover of music and art, everything from classic country to opera and she was a voracious reader. A perfect afternoon to Pat was one spent with an F. Scott Fitzgerald novel and a glass of Chardonnay. She always dreamed of owning a house with her own library in it. Pat had a strong sense of nostalgia, and loved to be reminded of her youth. For this reason she was an avid collector. If it was “retro” Pat had a set of them, be it classic cocktail shakers or children’s books. Her favorite times were when she was antiquing with Jim or her best friend Sally. She and Jim even ran a fun and successful eBay business selling some of the items they had collected over the years. Her later years were either spent relaxing with her Kindle, and her cat, Morrie, or reading books and doing puzzles with her granddaughter, Rylan. She was an amazing Mother, Grandmother, wife, sister and friend. She was kind and funny with endless generosity, and she will be missed greatly by her family and friends. She was preceded in death by her parents, her husband, Jim, and her brother, Tom. Surviving are her beloved son Rory and his wife Meghan, and her precious granddaughter, Rylan. Also surviving are brothers Dan (Kathryn) and Tim (Christine), stepsons Jimmie (Gail) Turner, Johnnie Turner and Jeff (Teresa) Turner, granddaughters Mariah, Sierrah, Feliciah and Dakotah, three great grandchildren and many nieces and nephews. Friends are welcome for visitation Wednesday, August 18th from 3-8 p.m. at Ansberg-West Funeral Home, 3000 W. Sylvania Ave. Funeral services will begin Thursday the 19th at 10:00 a.m. at the funeral home and will continue with a funeral service at 11:00 a.m. at Blessed Sacrament Church, 2240 Castlewood Dr., Toledo. Interment will follow at Resurrection Cemetery. Those wishing to consider making a memorial contribution might wish to consider the Tim Dever Scholarship Fund at Central Catholic High School or Hospice of NW Ohio.

Patricia Anne &#8220;Pat&#8221; Turner of Sylvania died peacefully on August 12th at Hospice of NW Ohio in Perrysburg. She had been in failing health for the past several weeks. She was the oldest child of Tim and Elaine Dever and was born in... View Obituary & Service Information

The family of Patricia Anne Turner created this Life Tributes page to make it easy to share your memories.