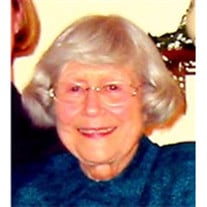 Patricia Jane Vogel, 84, of Maxwell Rd. passed away peacefully at home under the care of Hospice of Northwest Ohio on September 22, 2008 after a courageous battle with cancer. She was born in Toledo on May 26, 1924. She was a 1942 graduate of DeVilbiss High School and earned a Bachelor of Education degree from the University of Toledo in 1946 where she was a member Alpha Chi Omega Sorority. In the summer during World War II she worked at Vought-Sikorsky propeller plant on Alexis Rd. She touched the lives of many children, mostly kindergartners during her 45 years of teaching in the Toledo Public School System. She began her career at Stickney School, and then went to Whittier, Old Orchard, Heatherdowns, DeVeaux, and finally Elmhurst. She was the president of the Kindergarten-Primary Council of the Toledo Public School System and secretary of the DeVeaux PTA. Patricia was a lifelong member and former Sunday school teacher at Augsburg Lutheran Church. She was a charter member of Gamma Gamma chapter of Delta Kappa Gamma, a national honorary education sorority, a member of the American Association of University Woman, secretary of the Golden Alumni Society of the University of Toledo, and a member of its steering committee, a member of the Toledo Art Museum, Toledo Botanical Gardens, Toledo Area Metroparks, and Friends of the Library. She was an active volunteer and auxiliary member at Flower Hospital. She was also a volunteer for the Salvation Army, Red Cross, and the Manor at Wildwood. Pat was a devoted caregiver to her sister, Virginia, after she became ill in 1957 until her death in 1987. Also preceding her in death was her sister, Jeanne Imholt, and her beloved poodle and constant companion Pixy. She is survived by her niece, Marcia (Thomas) Bird of Adrian, Michigan; nephew, Fredric (Diane) Imholt of Toledo; special neighbor, Barbara DeWitt, and many dear friends. Friends are invited to visit after 11:00AM on Thursday September 25, 2008 in the Ansberg-West Funeral Home where services will follow beginning at 1:00PM. Interment will be in Toledo Memorial Park Cemetery. In lieu of flowers, contributions may be made to the Humane Society, Hospice of Northwest Ohio, or the charity of the donor's choice.

Patricia Jane Vogel, 84, of Maxwell Rd. passed away peacefully at home under the care of Hospice of Northwest Ohio on September 22, 2008 after a courageous battle with cancer. She was born in Toledo on May 26, 1924. She was a 1942 graduate of... View Obituary & Service Information

The family of Patricia Jane Vogel created this Life Tributes page to make it easy to share your memories.