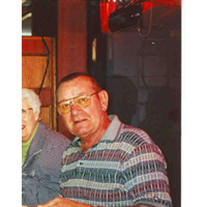 Paul M. Heiss, 82, passed away on February 13, 2007 in Hospice of Northwest Ohio. He was born in Altoona PA.on October 9, 1924 to Paul and Anna (Roiss) Heiss. He served his country honorably during WWII and was an inducted into the U. S. Army Signal Corp as a lineman and attached to the 8th Air Force. He served overseas from 1943-1945 until the end of the war. Paul worked as a Millwright for over 35 years retiring at the age of 62. In addition, he was instrumental in the starting and teaching one of the first apprentice programs for Local Union1393 in which he was a member for over 50 years. He also served as the recording secretary for local 1393 for over 20 years. After his retirement, Paul became part-owner and operator of 3 car washes with his son Gary. He was one of the original founders of the German American Festival and member of the Bavarian Sports Club, Bavarian Benevolent Society Bendover Club, and the GAF Society. He was a lifetime member of the VFW Post 606 and a member of Christ the King Church. Paul enjoyed golf, fishing and loved to play the accordion. He was a great father and grandfather and enjoyed regular Sunday dinners with his family. He will be missed by his beloved wife Catherine (Katie) of 56 years; son, Gary; daughter Nancy (Gordon) Gilmore, Julie (James) Bartnik; grandchildren, Paul Heiss, Brad Moores, Carley and Lindsay Bartnik, and Anya and Samuel Gilmore; special cousin Max Well and niece Barbara Fracaro. He was pre-ceded in death by his sisters, Mary Heiss, Ida Becker, Anna Liebig, Ellsie Willering and Katie Heiss. The family would like to express their deep gratitude to NW Ohio Hospice for the loving care that they gave Paul. Friends are invited to visit from 2:00-8:00PM on Thursday in the Ansberg-West Funeral Home, 3000 Sylvania Ave where a VFW service will begin at 7:00PM. A funeral mass will begin at 10:00AM on Friday at Christ the King Church. Interment in Toledo Memorial Park Cemetery. Memorials may take the form of contribution to Northwest Ohio Hospice Association or Christ the King Church.

Paul M. Heiss, 82, passed away on February 13, 2007 in Hospice of Northwest Ohio. He was born in Altoona PA.on October 9, 1924 to Paul and Anna (Roiss) Heiss. He served his country honorably during WWII and was an inducted into the U. S. Army... View Obituary & Service Information

The family of Paul M. Heiss created this Life Tributes page to make it easy to share your memories.