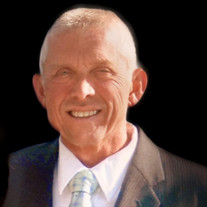 Paul J. Thomas, Jr. of Toledo Ohio passed away on August 30, 2021 at Mercy St. Anne Hospital after a long illness. Born on December 14, 1946, he was the son of Paul J. and Wilma Thomas. Paul attended St. Stephen’s Catholic School where he grew up in the neighborhood of Birmingham. Paul was a 1964 Central Catholic graduate where he participated in football for two years and basketball for four years. He was awarded All City Honorable Mention his senior year. Paul was a member of the 1962/1963 basketball team, which was inducted into the Central Catholic Hall of Fame. Paul worked for GM at the Powertrain plant and finished out his employment with them as a video specialist retiring after 32 years. After retiring he continued to work doing commercial snow removal and electrical projects. He had an impeccable work ethic and would always be happy to lend a helping hand to neighbors and friends with his expertise in computers and electrical projects. He took great pride in everything he did. All who knew him well would agree that he had a very big heart that he wore on his sleeve. Paul was married to Kathy Lichtie in April of 1986. For 35 years, Paul and his wife Kathy enjoyed their cottage at Clark Lake in the Irish Hills of Michigan. He spent countless hours with his lake family and was well known for his awesome campfires. Paul was an accomplished water skier and boatsman. He taught many adults to water ski over the years but especially enjoyed teaching kids. Left to cherish his memory are his wife, Kathy; daughter, Amy Thomas and son Robert Thomas, both of Florida; brother, Steve Thomas (Sue Ceparski) of Sylvania, Steve was Paul’s willing and loving co-caregiver, we were lucky to have him so close by. Michael (Kim) Thomas of Tennessee and many nieces and nephews. Paul was preceded in death by his parents Wilma and Paul Thomas, Sr. along with two brothers, John and James Thomas. The family would like to give special thanks to his doctors, their staffs and the wonderful doctors and nurses at St. Anne’s Hospital for their excellent care. A Celebration of Life gathering will be held at a later date. Family and friends are encouraged to share memories and online condolences by visiting ansberg-west.com. Memorials in Paul’s memory may be directed to Cancer Connection of Northwest Ohio or organization of donor’s choice.

The family of Paul J. Thomas Jr. created this Life Tributes page to make it easy to share your memories.