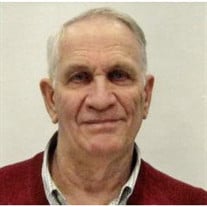 MOLIK Phillip W. Phillip W. Molik, 77, of Toledo, passed away peacefully on Wednesday, November 26, 2014, surrounded by his family. He was born in Anderson, IN, on February 28, 1937. After graduating in 1955 from Whitmer High School, Phil enlisted in the Army. He served honorably for 5 years, including 2 years in Germany. Phil met his future wife, Janet Schwanzl, at a TCCY dance and they just celebrated their 50th anniversary in May. He was a driver for Seaway Foodtown for 18 years and then worked in the warehouse for the last 8 years, before retiring. Phil was a member of the Knights of Columbus and enjoyed playing cards on Monday night with the guys. He also loved billiards, fishing and taking his 2 beagles, Lady and Echo, for walks, but most of all he loved spending time with his family, especially, his one and only granddaughter, Alexis Molik. Phil is survived by his loving wife of 50 years, Janet Molik; son, Kenneth Molik; daughter, Valorie (Rich Sepulveda) Molik; granddaughter, Alexis (Franco Colon) Molik and his brother, Tom (Mary) Molik. He is also survived by his brothers-in-law, Robert Schwanzl and Terry Fravor; nieces, nephews and cousins. Friends are invited to visit from 2- 8 p.m. on Friday, in the Ansberg-West Funeral Home, 3000 Sylvania Avenue, (between Secor and Douglas Roads). Mass of the Resurrection will be celebrated on Saturday at 12:30 p.m., at St. Clement Church, 3030 Tremainsville Road, (please meet at church). Interment will follow at Whiteford Cemetery. In lieu of flowers the family suggests a memorial donation to ProMedica Hospice, (Ebeid Hospice on the campus of Flower Hospital). Online condolences may be sent to the family at www.ansberg-west.com

MOLIK Phillip W. Phillip W. Molik, 77, of Toledo, passed away peacefully on Wednesday, November 26, 2014, surrounded by his family. He was born in Anderson, IN, on February 28, 1937. After graduating in 1955 from Whitmer High School, Phil... View Obituary & Service Information

The family of Phillip W. Molik created this Life Tributes page to make it easy to share your memories.