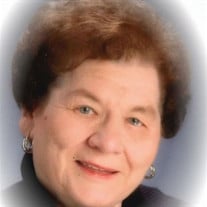 Phoebe Ann Goldberg, was the only child born to Benjamin and Mary Maciejewski. Phoebe was born, October 2, 1933, in Toledo, Ohio. After a six month struggle with complications after cancer surgery, she peacefully passed June 14, 2018, at Hospice of Northwest Ohio. Phoebe worked in several industries throughout her career. She started out as a bank teller then took time off to be a mother to her two sons. Later she resumed her working career as a Real Estate Closing Secretary, first with Heinzroth Mortgage, then Sautter Realty. She then spent time as a secretary/administrative assistant at Prestolite, Dana Corporation and finally Owens Corning Fiberglas, from which she retired. In retirement, she enjoyed traveling with her mother and also her grandchildren, to visit family and other destinations around the country. She was an active member at Christ the King Church, where she enjoyed working with the knitting group and as a volunteer on several other committees. She was well known for her knitting creations, particularly her custom made Christmas Stockings for newborns in many families. She was also know for the wide selection of cookies on her Christmas Gift Trays. Phoebe was preceded in death by her parents and her beloved son, David Goldberg. Phoebe leaves behind, her son, Gary (Jill) Goldberg; granddaughter, Cassandra Goldberg; grandsons, Brian Goldberg and Benjamin (Lauren) Goldberg and great-grandson, Nicholas Goldberg. Friends may visit at Christ the King Church, on Thursday, June 28, 2018, from 10 a.m. until the funeral mass at 11 a.m. Inurnment will be private. Memorial contributions may be made to Christ the King Church, 4100 Harvest Lane, Toledo, OH 43623. Arrangements entrusted to the Ansberg-West Funeral Directors, (419) 472-7633. Online condolences may be sent to the family at www.ansberg-west.com

Phoebe Ann Goldberg, was the only child born to Benjamin and Mary Maciejewski. Phoebe was born, October 2, 1933, in Toledo, Ohio. After a six month struggle with complications after cancer surgery, she peacefully passed June 14, 2018,... View Obituary & Service Information

The family of Phoebe A. (Maciejewski) Goldberg created this Life Tributes page to make it easy to share your memories.

Phoebe Ann Goldberg, was the only child born to Benjamin and...