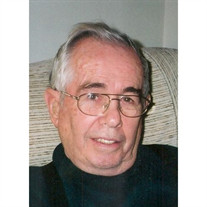 Ramon “Buddy” Carr Ramon “Buddy” Carr, 89, passed away peacefully on Monday, March 7, 2016. He was born in Napoleon, Ohio on July 5th, 1926 to Nicholas and Mildred Carr. He graduated from Woodward High School in 1944 and later that year enlisted in the US Navy as a Pharmacist mate stationed in San Diego, California. While in the Navy he earned several boxing titles and a position on a team that fought during the War Bond shows. After his service in the Navy, Buddy continued his passion for boxing, fighting amateur winning two Golden Glove Championship titles and later turning professional. In 1950, Buddy met his match and the love of his life, Eleanor Hauck. They married on May 13, 1950 and together they had seven children. Buddy joined the Toledo Police Department in 1950, retiring in 1981 after 31 years of service. During his years on the force he coached many boxing athletes and further developed the Toledo Police Athletic League (P.A.L.). He treasured the time he spent in the gym coaching the Toledo youth. In his 14 years of coaching, Buddy coached three Toledo Golden Glove teams which captured the team championship in Chicago Golden Gloves Tournament. One team in particular went on to become the U.S. Championship team. Buddy was a coach in the 1960 Olympic Games in Rome where gold medals were won by Wilbur “Skeeter” McClure (from Toledo), Ed Crook and Cassius Clay (a.k.a. Muhammad Ali). He also coached the AAU team which toured England and Ireland in 1963. In his boxing career, Buddy coached 49 Toledo Golden Glove Champions, 7 National Golden Gloves Champions, 6 National AAU Champions and one champion each in the Pan American Games and in the 1960 Olympics. Buddy was inducted into the Greater Toledo Athletic Hall of Fame in 1967, recognized by the Toledo Golden Gloves Association in 1992 for his work with area youths through sports, employment and education and inducted into the Woodward High School Hall of Fame in 1994. Of all his successes throughout his career, he felt his greatest achievement was raising his seven children. His greatest joy was spending time with his family and friends at his lake home “Carr Barns” in Michigan. Buddy is preceded in death by his beloved wife of 63 years, Eleanor, parents Nicholas and Mildred Carr, daughter Deborah and sister Betty Baldour. He is survived by his children Nicholas Carr, Dennis Carr, Kathleen (Mark) Moses, Dr. Timothy (Karen) Carr, Kevin (Sherry) Carr, Cynthia Roy and special niece Mary Kay Baumgartner. He leaves ten grandchildren and four great-grandchildren. He is also survived by his twin sister Ramona Briggs, sister Bridget Riley, sister in laws Florence Sheroian and Margaret Welcheck, many nieces and nephews and lifelong friend Bill Woodward. Visitation will be from 1:00 to 7:00 p.m. at Ansberg-West Funeral Home, 3000 Sylvania Ave. on Sunday, March 13, 2016. Viewing will also be at the Historic Church of St. Patrick beginning at 9:00 a.m. Monday, March 14, 2016 with the Mass of The Resurrection immediately following at 10:00am. Buddy will be laid to rest at Calvary Cemetery. Memorial Donations may be made to the Historic Church of St. Patrick or to Senior Independence. A special thank you for the loving care given to Buddy from all the caregivers at Parkcliffe Community Center and Senior Independence. To send his family online condolences, please visit www.ansberg-west.com.

The family of Ramon G. Carr created this Life Tributes page to make it easy to share your memories.