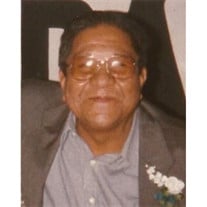 Hernandez, Raul Sr. "Blackie" , 84, of Toledo, OH, passed away on Saturday, September 27, 2014 at home. He was born August 14, 1930, in Odem, TX. He married his "Chuy," Lola Hernandez, on November 12, 1958 who preceded him in death. Those who knew him knew what he liked including music by Fats Domino, but that didn't stop him from being a loyal husband, father and hardworking man. He retired in 1985 from Royster's Fertilizing Co. Raul was the last Tio to the families of his sisters, Trinidad Salas, Maria Mendiola, and brother, Felix Hernandez, all who preceded him in death. He was also preceded in death by his son, Rudy Sr. and grandson, Thomas. Surviving are his children, Raul Jr. (Crystal), Paul (Laura), Norma, Valerie and Alexandra Hernandez; 14 grandchildren, 29 great grandchildren, many nephews and nieces, including, Nico (Nicole Magana) who will miss him dearly. Although he's gone, we know he's going to Da Le Shine on that Blueberry Hill with his Chuy. Visitation will be from 2-8p.m. Thursday, October 2, 2014 at Ansberg-West Funeral Home, 3000 W. Sylvania, Toledo, OH 43613. A funeral mass will be held Friday at 10 a.m. at Immaculate Conception, with interment to follow at Restlawn Memorial. Memorial contributions may be made to the Raul R. Hernandez Memorial Fund. To send online condolences, please visit: www.ansberg-west.com

The family of Raul R. Hernandez created this Life Tributes page to make it easy to share your memories.