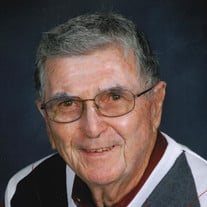 Ray A. Murnen, Jr., 93, of Toledo, died Friday, December 27, 2019 at Rosary Care Center. Ray was born on February 27, 1926 to Kathryn and Ray Murnen Sr. He was the oldest of five siblings, growing up and residing in Trilby, the Old West End, and West Toledo. A 1944 Graduate of Central Catholic High School, he enlisted in the Army during World War II, and earned a Bronze Star Medal for heroic actions in battle. Returning from the war, he married Helen Lemle in 1947. They had six sons and were longtime members of Blessed Sacrament Church, where Ray was a very active parishioner and youth sports coach. He was a lifelong supporter of Central Catholic, where he served in various roles, including a spot on the Athletic Board of Control. Ray worked with his father at Murnen Mortgage Investor’s Corporation, and later operated the company with his three brothers. In 1969, he was named President of the Ohio Mortgage Bankers Association. As a member of the Downtown Toledo Kiwanis Club, Ray forged many friendships and diligently supported the organization’s charitable efforts, including the annual Pancake Breakfast and Peanut Sale. He enjoyed golfing in the Kiwanis League and on Friday’s with his high school buddies, whom he also joined for a weekly lunch later in life. Ray modeled his deep Catholic faith through his steady character, kindness and devotion to his wife, sons, grandchildren, and great-grandchildren. When he wasn’t supporting them at a family sports event, he was found following his beloved Detroit Tigers. In 2007, Ray was preceded in death by his wife of 60 years, Helen. He was also preceded in death by son, Larry; grandson, Kurt; and siblings: Jack, Dick, Mary Alice and Tom. Surviving are his sons: Mike (Sandy), Pat (Cheryl), Marty (Sandra), Terry (Bernie), Dan (Shelley); Daughter in law, Karen; Sister in law, Mary; 19 grandchildren and 25 great-grandchildren. The family would like to acknowledge the outstanding care Ray received at West Park Place and Rosary Care Center in his final years. Family and friends are invited to visit on Thursday, January 2nd, from 3-8 p.m. at the Ansberg-West Funeral Home, 3000 Sylvania Avenue, (between Secor and Douglas Roads), where the rosary will be recited at 3 p.m. Visitation will also be held on Friday, January 3rd, at Christ the King Catholic Church, 4100 Harvest Lane, from 10 a.m. until the funeral mass at 11 a.m. Burial will be at Calvary Cemetery at 2:30 p.m., where the Lambertville VFW Post 9656, will conduct Military Honors. In lieu of flowers, please consider a donation to Central Catholic High School, 2550 Cherry Street, Toledo, OH 43608 or the FC44 Foundation (https://fc-44.org), which exists to perpetuate the legacy of his grandson Kurt, fight cancer, and provide scholarship assistance at Kettering Alter High School.

Ray A. Murnen, Jr., 93, of Toledo, died Friday, December 27, 2019 at Rosary Care Center. Ray was born on February 27, 1926 to Kathryn and Ray Murnen Sr. He was the oldest of five siblings, growing up and residing in Trilby, the Old West End,... View Obituary & Service Information

The family of Ray A. Murnen created this Life Tributes page to make it easy to share your memories.