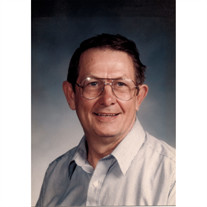 Raymond “Ray” Squire, 84, passed away on Thursday, December 31, 2015. He was born on May, 1, 1931, and graduated from Waite High School in 1948. Ray served honorably for 2 years in the U.S. Army, during the Korean War. He attended the University of Toledo with help from the G.I. Bill and his wages as an apprentice carman for the CSX Railroad. He and Pat Rynder (a classmate) were married on the evening of June 7, 1957 at Trinity Episcopal Church. On June 8, they both graduated with degrees in chemical engineering. Ray worked as a chemical engineer at DuPont, Allegheny Ballistics, and Maumee Chemical. In 1964 he became a chemistry teacher at Start High School, retiring in 1992 after 29 ½ years of service. During his time at Start, he served for several years as an athletic equipment manager and participated in the construction of the school’s stadium. Ray was a lifelong sports fan. In his youth he played hockey, baseball, and football. He remained active throughout his life, and he and Pat were longtime (30 years) members of the Toledo Area Bicyclists and the Maumee Valley Adventurers. He served for 30 years as the director of the Portage River Bicycle Tour. Each year they participated in several multi-day bicycle tours such as the Hilly Hundred, TOSRV, TRIRI, and Michigan Shoreline Tour, and they did many others on their own, including trips to the Canadian Rockies, the Natchez Trace, and from Toledo to Bar Harbor, Maine. Ray was an enthusiastic gardener, and his small city backyard was almost completely devoted to vegetables and fruit trees. He was active in his church, with 50 years membership at the former St. Mark’s Episcopal Church as a vestry member and a member of the maintenance committee. When that church closed, he and Pat returned to Trinity Episcopal. Their service to the community included 15 years volunteering with Mobile Meals and serving as poll workers in their neighborhood for elections. He is survived by his wife of 58 ½ years, Pat (Rynder); sons, David of Lima, OH and Dr. Walter (Dr. Allison Carey) of Huntington, WV, and Jesse (Dr. Jennifer Sader) and grandchildren, Dr. Chris Jordan-Squire, Megan Jordan-Squire, Bethany Jordan-Squire, and Dashiell Carey-Squire. He is also survived by his sister, Ruth Powell and his brother, Gerald of Middletown, OH. He was preceded in death by his parents, Edwin Squire and Mable (Grotie), his brother, Robert, and his sister, Kathryn. Visitation will be held from 9-11 a.m., Saturday, at Trinity Episcopal Church, (Adams at St. Clair in downtown Toledo), where funeral services will follow at 11 a.m. Interment will be at Historic Woodlawn Cemetery. In lieu of flowers, memorial contributions may be made to Trinity Episcopal Church, 316 Adams Street Toledo, OH, 43604, or Hospice of Northwest Ohio, 30000 River Road, Perrysburg, OH 43551. Online condolences may be sent to the family at www.ansberg-west.com

The family of Raymond Julius Squire created this Life Tributes page to make it easy to share your memories.