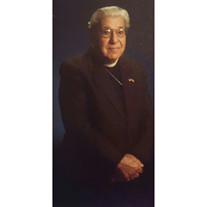 REV. CHRIS HADGIGEORGE A PRIEST FOREVER Father Chris Hadgigeorge, Pastor Emeritus of Holy Trinity Greek Orthodox Cathedral, joined his heavenly Father on December 31, 2015. Father Chris was born on August 3, 1924 in Youngstown, Ohio to William and Paraskevi (Spanos) Hadgigeorge. He was the second child of three, brother Dr. Frank George (deceased) and sister, Presvytera Zafera Bartz. He graduated in 1942 from East High School in Youngstown, Ohio. He then followed his calling, becoming a priest and attended Holy Cross School of Theology in Pomfret, Connecticut and Brookline, Massachusetts. He married Ann Tsagaris from Warren, Ohio on March 7, 1948. He was ordained a priest on April 29, 1948 and he was assigned by Bishop Germanos Polyzoidis in Indianapolis, Indiana. In 1957, he was transferred to Saint Nicholas Church in Detroit, Michigan. In December 1960, he became the pastor of Holy Trinity Greek Orthodox Church in Toledo, Ohio. He retired on September 1, 1991. He then became Pastor Emeritus of Holy Trinity until his death on December 31, 2015. Fr. Chris was elevated to Protopresbyter by Archbishop Iakovos in 1973. He was presented the Patriarchal Cross from Patriarch Bartholomew in 2006 in Constantinople. In 1985, he was awarded the Saint Paul Medal by Archbishop Iakovos, and in 1973 he was elevated to Protopresbyter (Very Reverand) by Archbishop Iakovos. The St. Romanos Melodos Medal was given to Fr. Chris from the Mid-Eastern Greek Orthodox Choir Federation in 1998. Fr. Chris was a priest for 67 years. He served as pastor at Holy Trinity Greek Orthodox Cathedral for 31 years and 24 years as Pastor Emeritus. He presided over the 50th, 75th, and 100th year celebration of the Cathedral. In 1966, the church was consecrated and elevated to a Cathedral status. In 2004, on his 80th birthday, the corner of Walnut and Superior was renamed Fr. Chris Hadgigeorge Way by proclamation of the City Council. Fr. Chris was a humble, compassionate, and kind man. He was soft-spoken and a gentle soul. He loved his family, his Church, and his parishioners. He was a role model for other priests. Not only was Father a pillar of the community but also the pillar of his family. He always offered his guidance, love, and support. He enjoyed the growth of his family and loved each and every one of his children, grandchildren, and great grandchildren. His eyes would light up whenever they were present. Fr. Chris was a member of Young At Heart and a life-long member of Ahepa. He also served on the Toledo Council of Churches. Fr. Chris is survived by his loving wife of 67 years, Presvytera Ann Hadgigeorge, twin daughters, Pattie Senerius, and Angie (Tom) Bohland, son, William (Eva) Hadgigeorge of Strongsville, Ohio, grandchildren, Christopher (Amberly) Bohland of Columbus, Indiana, Alexis (Kevin) Van Valkenburgh of Beaver, Pennsylvania, Nicole Senerius, Kristi Hadgigeorge of Strongsville, Ohio, Michael Senerius of Pittsburgh, Pennsylvania, and Anastasia Hadgigeorge of Strongsville, Ohio, great grandchildren, Audrey Bohland and Sophia VanValkenburgh. Visitation will be at the Holy Trinity Greek Orthodox Cathedral on Monday, January 4, 2016 from 1:00 pm to 9:00 pm. Trisagion Prayers will be held at 7:00 pm. A Vesperal Liturgy will be held Tuesday January 5, 2016 at 9:00 am. at Holy Trinity Greek Orthodox Cathedral. Funeral Services will be held at the Church at 11:00 am. followed by internment at Toledo Memorial Park. A memorial lunch will be held after the internment.

The family of Rev. Chris W Hadgigeorge created this Life Tributes page to make it easy to share your memories.