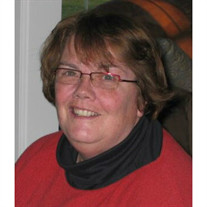 Pastor Karen M Shepler passed away Friday March 10, 2017 at her home in Toledo, Ohio. She was 65. She was born to Harry A and Lillian (Gruber) Shepler on June 1, 1951 and grew up in Waterville and Whitehouse, Ohio. She graduated from Anthony Wayne High School and was inducted into the Anthony Wayne Alumni Hall of Fame. She worked several years after graduating from Bowling Green State University, and then attended seminary school at United Theological Seminary in Dayton in 1983. She was an ordained elder in the United Methodist Church serving churches in Dayton and Columbus before returning to Monroe St. Methodist Church in Toledo, from which she retired in 2013. She also served in a refugee camp in Texas and directed a medical clinic in Mexico. The most important things in her life were faith, family, social justice and integrity. Her call to ministry came to her from youth experiences at church and the local foreign missions. Family was a source of great joy and strength. They always had a good time together. She enjoyed times of laughter and tears. There were many holidays spent together, precious memories of her mother crying with joy over Christmas gifts. The traditional acting of the manger scene with the little ones was also a treasured memory. And a long tradition of watching, reenacting and enjoying “Christmas Story” (It was Karen’s tongue that got “schtuck” on the metal pole.) And the leg lamp… Her family was built on faith and commitment, a value which affected her life in many ways. She had unique and special relationships with each of her nieces and nephews. To some of her nieces and nephews she was a role model and fostered their interest in ministry and social causes. To others she was the crazy fun Aunt who provided great adventure and taught them to enjoy life fully. She was the “Muy loca Tia Grande”. She was also a great joke teller She brought intense joy, music, and laughter to all of her family. She loved fishing and being out in nature. She had great joy in traveling with her good friend Barbara Coleman. They traveled to Nova Scotia, Ireland, Upstate New York and cross country visiting family along the way. They were always willing to go out of the way to see unusual sights or laughable attractions. She had a passion for the poor and a commitment to justice inspired by a trip to Haiti at age 16 where she developed an awareness of what it meant to be a minority. She was also shaped by her experience interacting with inner city teens at St Paul’s United Methodist Church downtown Toledo. She continued her work to eliminate racism at the YMCA. She had a great passion for the marginalized, the voiceless, and those affected by white privilege. She recently founded Dialogue to Change, which encourages small groups to meet regularly and talk about race and inequality in the Toledo area.. She is survived by her sister Marilyn (Jim) Simpson and her brother Harry (Barbara) Shepler, 8 nieces and nephews, and many great and great great nieces and nephews. Services will be Sat. March 18, 2017 at 3:00 pm at Monroe Street United Methodist Church with visitation from 2-3 pm and following the service. Memorial contributions may be directed to Monroe Street Neighborhood Center Freedom School, Monroe Street United Methodist Church 3613 Monroe St. Toledo, oh 43606. Arrangements entrusted to Ansberg-West Funeral Directors. Condolences for Pastor Karen's family may be expressed online at www.ansberg-west.com

Pastor Karen M Shepler passed away Friday March 10, 2017 at her home in Toledo, Ohio. She was 65. She was born to Harry A and Lillian (Gruber) Shepler on June 1, 1951 and grew up in Waterville and Whitehouse, Ohio. She graduated from Anthony... View Obituary & Service Information

The family of Rev. Karen M. Shepler created this Life Tributes page to make it easy to share your memories.