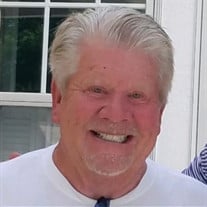 Richard G. Esser, A.K.A., “The Beer Baron of Toledo”, passed away unexpectedly May 22, 2021. He was born July 15, 1945 to Richard and Marjorie Esser in Toledo. A graduate of Whitmer High School, Class of 1965, Rich attended The Ohio State University before earning his degree in Education from the University of Toledo. He taught English and coached basketball at Jones Jr. High, where he likely developed his unmistakable booming voice that came to define his personality and informed everyone in the room who was in charge. On April 7, 1984, Rich took over the reins at Treu House of Munch, growing the market share from the low 30’s to over 60%. His expertise earned him a seat on the prestigious Anheuser-Busch Wholesaler Advisory Panel from 1991 to 1994, an honor bestowed on only a select few. Rich was a prodigious benefactor and supporter to countless charities and community events in Northwest Ohio and was a strong supporter of the Ohio State Buckeyes and University of Toledo Athletics. A member of Inverness and Erie Shooting and Fishing Club, Rich had an extremely tight knit group of friends with whom he frequently enjoyed sharing a cold Budweiser. He was the undisputed “king of the one liner” and fun and laughter followed him wherever went. He enjoyed cooking, hunting, travel, golfing, being with family, spending weekends at Catawba Island and spending time his grandchildren. Rich is survived by his son, Todd (Nicole) Esser; daughter, Tracey (Joe) Perkins; grandchildren, Caroline and Christian Esser and Pressley and Paxton Perkins; sisters, Judy Stolz, Kendra and Kim Esser. He was married to Sandra Esser for over 40 years. Per Rich’s wishes there will be no services. A Celebration of his Life will be scheduled at a later date. In lieu of flowers, please consider a donation to the First Tee of Lake Erie (https://www.firstteelakeerie.org/) or the Evan’s Scholars Program (https://wgaesf.org/).

The family of Richard G. Esser created this Life Tributes page to make it easy to share your memories.