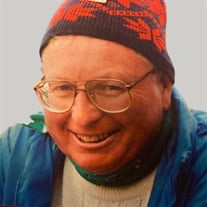 Richard A. “Dick” Hamilton, 88, of Toledo, passed away on Friday September 4, 2020, at his home. He was born February 14, 1932, in Toledo and was the son of the late Harry and Esther (Gore) Hamilton. Dick was a graduate of Scott High School and received his AB and JD from the University of Michigan. An attorney in Toledo for over 60 years, Dick took pride in his work often assisting the underserved and marginalized with their legal issues. An avid sailor, Dick was a member of the North Cape Yacht Club in La Salle, Michigan and played a lead role in establishing and directing the “Jib and Main” fleet on Lake Erie, a racing class which subsequently spread to other great lakes fleets and made sailboat racing more accessible to the general public. Dick was also an Eagle Scout with Troop 29 of the First Congregational Church in Toledo and later served as their Scoutmaster for 35 years. In addition to sailing, Dick loved to ski and hike with his wife (Ann) and family and was equally passionate about Michigan sports and classical music. Over the years, Dick and his family traveled extensively in order to experience the wonder of nature first-hand. He particularly loved classical music and opera performances which he enjoyed attending with Ann and his close friends. “Dick was an honorable man who lived his life on his own terms and in line with his own conscience,” according to his sons Richard A., Jr. and Thomas. Dick’s wife Ann Elizabeth (Davis) Hamilton, to whom he was married in 1958, died in 2015. Dick was also preceded in death by his brother Harry G. Hamilton. Survivors include his sons Richard A., Jr. (Maria V.) and Thomas G. Hamilton, grandchildren, Andrew P. Hamilton, Sophia I. Hamilton and Katherine E. Hamilton. A memorial service will be held on Saturday, October 24, 2020, at 1 p.m., at the Ansberg-West Funeral Home, 3000 Sylvania Avenue, (between Secor and Douglas Roads). Due to COVID 19 regulations, facial coverings and social distancing will be required. To view the video of Richard’s Service, please click here. In lieu of flowers, tributes may be made in the form of contributions to Toledo Metroparks (https://metroparkstoledofoundation.org/ways-to-give/) and the North Cape Sailing School (https://www.ncyc.net/ncss/index.cfm). Both Dick and Ann greatly enjoyed the North Cape sailing community and Toledo’s metro park system. The family would like to extend a special thank you to his nurse, Kris from ProMedica Hospice for providing him excellent and compassionate care. They would also like to thank Emily, Michelle and Sherry from Senior Helpers for making it possible for Dick to spend his final days in his home of more than 50 years. Online condolences may be sent to Dick’s family at www.ansberg-west.com

The family of Richard A. Hamilton created this Life Tributes page to make it easy to share your memories.