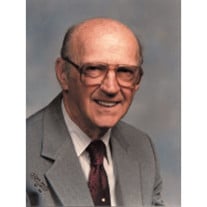 Harley Richard Joseph Richard Joseph Harley, 95, passed away peacefully on Saturday, January 6, 2013, at his home surrounded by family. Dick was born to Mary and Joseph Harley on January 25, 1917, in Toledo. He was a true servant of the Lord and leaves behind a legacy of abundant love, caring, compassion, faithfulness and all that is good and lovely in this world. He was employed by the U.S. Postal Service as a mail carrier until his retirement in the 1970s. He was a member of St. Mary's Church for 57 years, where he was active as an usher, a member of the Holy Name Society, a Church Youth Organization moderator and was a Hall of Fame member. Dick was also a member at St. Clement's Church for 38 years and was active in the Holy Name Society, and was a Eucharistic minister, lector, and usher. He enjoyed wood working, playing cards, collecting stamps, crossword puzzles, and spending time with his large family above all. His proudest role was that of husband, father, grandfather, uncle, friend and neighbor. He was always ready to lend a helping hand to anyone who needed it, no matter what the project might have entailed, and he always had an open ear if anyone needed someone to listen. He could always be seen dressed sharply in a shirt, tie and slacks. Dick was witty, sharp, punny and funny ??" he always had a joke at the ready ??" and he was a fantastic Euchre and Pinochle player. Always a sheer joy to be around, he was very much loved by many and he will be dearly missed. He is survived by his loving wife of 70 years, Susan (nee Johnson), eight children -- RuthAnn (Robert) Carr, Richard (Joselyn) Harley Jr., Roy (Patricia) Harley, RoseMarie (David) Shenofsky, Pamela Harley, Leon (Deborah) Harley, Rita Harley, Gerard (Susan) Harley; 28 grandchildren, and 52 great-grandchildren. He was preceded in death by his parents; sisters, Margaret Kaltenbach and Helen Zraik, his infant son, Robert; and grandson, Eddie Ligman. Friends are invited to visit from 2:00-8:00PM on Thursday, January 10, 2013 in the Ansberg-West Funeral Home, 3000 Sylvania Ave. where the Rosary will be recited at 7:00pm. Prayers will begin in the funeral home at 9:20am on Friday and will be immediately followed by the Mass of the Resurrection beginning at 10:00am at St. Clement Church. Interment will follow in Mount Carmel Cemetery. Those wishing to make memorial contributions are asked to consider St. Clement Church or the charity of the donor's choice. To send Dick's family online condolences, please visit www.ansberg-west.com

Harley Richard Joseph Richard Joseph Harley, 95, passed away peacefully on Saturday, January 6, 2013, at his home surrounded by family. Dick was born to Mary and Joseph Harley on January 25, 1917, in Toledo. He was a true servant of the Lord... View Obituary & Service Information

The family of Richard Joseph Harley created this Life Tributes page to make it easy to share your memories.