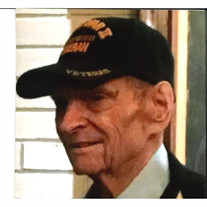 Richard C. Kieper, “Jake”, “Uncle Jake”, 90, died peacefully on Wednesday, January 17, 2018, at Hospice of Northwest Ohio. He was preceded in death by his wife of 61 years, Rosemary (Heinold) Kieper, who passed away in December, 2006. He was also preceded in death by his parents, Albert C. and Maybelle (Borgelt) Kieper; sister, Ruth Renschler and brother, Robert Kieper. He is survived by three generations of nieces and nephews. Jake was very proud of his service during World War II, enlisting in the US Army at the age of 17. Upon completion of infantry training he was sent to the Pacific theatre where he volunteered for a secret assignment with five others to destroy a bridge on an unknown Japanese occupied island. Their mission was a success but despite years of trying he was never able to find out the name or location of the island. After that mission, Jake was assigned to the Mariana Islands serving in Guam, Tinian and took part in the invasion of Saipan. He saw weeks of brutal, non-stop combat on Saipan enduring, with the rest of his fellow soldiers, the ugliness and horrors of war. After the majority of the Japanese units defending the island were finally defeated Jake survived the numerous surprise attacks from what was left of the enemy. His combat experiences haunted Jake for the rest of his life although he never let that be known until his final years. After the cessation of hostilities, Jake was sent to the Aberdeen Proving Grounds for ordnance training. He returned to Saipan as an Ordnance Logistics and Supply Specialist as Chief Clerk assigned to the 3241st and 199th Ordnance Companies, attaining the rank of Staff Sergeant. After his honorable discharge in December, 1946, Jake worked at the Rossford Ordnance Depot starting in the Parts Identification and Classification Section and then the Inspection Division. He later became Chief of the Material Planning and Forecasting Section of the Automotive Rebuild Section and the Chief of the Stock Management Branch of the Stock Control Division. Jake also was designated as a Charge Account Ordering Officer and assigned to the Contract Awards Board. Jake retired from Rossford Ordnance in 1960 and moved to Ardmore, Oklahoma where he worked for the Moore Insurance Adjusting Agency and also established a bookkeeping and accounting practice, doing work for several small businesses in Ardmore. Jake and Rosemary were active in the First Christian Church in Ardmore where they both sang in the choir and were counselors for the CYF Youth Group. Jake and Rosemary returned to Toledo in 1964 where he was employed by Acme Automatic Door Company in both sales and service until his retirement in January, 1983. They also became active at the Alexis Road First Christian Church where they both sang in the choir. Jake was also Superintendent of Sunday Schools, Chairman of the Board, a Deacon and an Elder. Jake was a lifetime member of VFW Post 2898, Walter Weller American Legion Post 135 and a life member of the Disabled American Veterans. He was also a member of the Whiteford Valley Golf Club for more than 30 years. Friends may visit on Monday, from 10 a.m. until the funeral service at 1 p.m., at the Ansberg-West Funeral Home, 3000 Sylvania Avenue, (between Secor and Douglas Roads). Interment will follow at Toledo Memorial Park, where full military services will be conducted by the Lucas County Burial Corps. In lieu of flowers, the family suggests memorials to Hospice of Northwest Ohio, 30000 East River Road, Perrysburg, OH 43551. The family would like to express their sincerest gratitude to the Hospice nurses and staff who provided excellent care and continual comfort to Jake and his family over the last two years during good times and bad. Online condolences may be sent to the family at www.ansberg-west.com

The family of Richard C. Kieper created this Life Tributes page to make it easy to share your memories.