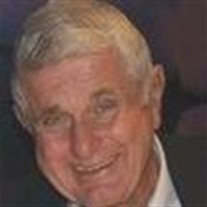 Richard Irvin Lehmann, "Dick," arrived at his heavenly home on the evening of January 6, 2019 while completely and lovingly surrounded by his family. Dick was born on June 4, 1939 to Irvin and Madeline (Walters) Lehmann, he grew up in West Toledo and was a 1957 graduate of Central Catholic High School. He attended Bowling Green State University. Dick honorably served our country in the U.S. Coast Guard reserves from 1959 to 1967. He married his high school sweetheart Marcia (Erd) on November 19, 1960 at Our Lady, Queen of the Most Holy Rosary Cathedral and they celebrated their 58th wedding anniversary this last fall. Dick was a third-generation business owner, along with his brother-in-law Richard Parker, of Lehmann Greenhouse in Temperance, Michigan which was originally started by his grandfather, father and uncle in 1939. His son David, later joined him in the family enterprise. Dick's passion and love for his work kept him involved with the business until his final days. Dick will be remembered for his larger than life persona of making everything in life more fun and treating everyone he met special. From the squeals of delight from his grandchildren as he raced them on an innertube around Round Lake to his crazy antics at family and friends' gatherings, Dick was that special light people loved to be around. You were not a stranger around Dick Lehmann for very long. For nearly the past forty summers, Round Lake Michigan was Dick and Marcia's weekend home which was the summer retreat for many family gatherings. No weekend was complete without at least one slow cruise around the lake, with family and friends listening and singing to his favorite 50's and 60's music tunes. Dick had a wonderful, individual connection with each of his children and grandchildren, and would make sure he supported them in their special life events and athletic contests, always making sure each child felt like they were the most important person. He always shared kind words of encouragement to boost their confidence. Everything was just better if "Papa" was there. He was a life-long Central Catholic, Detroit Tigers, The Ohio State Buckeyes and long-suffering Detroit Lions fan. He had the uncanny ability to remember statistics and players from decades ago with total recall. He loved being on the golf course with his buddies and once scored a hole-in-one on the 16th hole of Devils Lake Golf Course. He will be dearly missed by all his family and friends, but we take great comfort in knowing the impact he has left on the lives for generations to come. If a legacy can be defined as a name that is carved in our hearts and not on a tombstone, but as something that is etched into our minds and the loving stories that are shared, Dick has left us a wonderful legacy. Dick is survived by his loving wife Marcia and their three children; Lisa (Greg Ballmer) Bachmayer, Kathryn (Jeff) Mills and David (Robin) Lehmann. Seven grandchildren; Erica Bachmayer, Amanda (Brandon) Godsey, Aaron (Demmetra Galdeen) Mills, Zachary Mills, Kayla, Brook and Taylor Lehmann. Two great-grandchildren; Connor Lehmann and Mason Godsey, with a third on the way. Dick is also survived by his two sisters; Linda (Richard) Parker and Debra Miller, sister-in-law Marlene Zissoff, brother-in-law Larry (Sally) Erd, nieces and nephews, and a host of very wonderful and life-long friends. Visitation will be on Wednesday, January 9, 2019 from 2:00 – 8:00 PM at the Ansberg-West Funeral Home 3000 W. Sylvania Avenue, Toledo, Ohio 43613. A Mass of Christian Burial will take place on Thursday, January 10, 2019, commencing at 10:00 AM at St. Clements Catholic Church 3030 Tremainsville Road, Toledo, Ohio 43613, followed by a private family burial. In his honor, donations may be made in Richard I. Lehmann's name to research at The Charcot-Marie-Tooth (CMT) Association P.O. Box 105 Glenolden, Pennsylvania 19036, or to a charity of the donor's choice.

Richard Irvin Lehmann, "Dick," arrived at his heavenly home on the evening of January 6, 2019 while completely and lovingly surrounded by his family. Dick was born on June 4, 1939 to Irvin and Madeline (Walters) Lehmann, he grew up in West Toledo... View Obituary & Service Information

The family of Richard Irvin "Dick" Lehmann created this Life Tributes page to make it easy to share your memories.

Richard Irvin Lehmann, &quot;Dick,&quot; arrived at his heavenly home on...