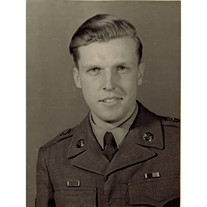 Richard “Dick” Charles Schultz, age 86, a life-long resident of Toledo, Ohio, passed away peacefully surrounded by his loving children, grandchildren and great-grandchildren Day, Thursday, October 5, 2017 at home. The world has just lost a great and compassionate man, father, grandfather, brother and uncle, and Heaven has just gained another great carpenter! He was a life long parishioner of Blessed Sacrament Catholic Church, Toledo, OH. He was born in Toledo, OH on April 19, 1931 to Ralph and Florence (Erard) Schultz. Richard was a 1949 graduate of Macomber High School. He also attended Toledo Central Catholic High School. He was a life-long auto mechanic and worked for Brahier Service from 1954 – 1982, and Earl Bros from 1982 – 2000, and even after retiring in 2000 he continued to enjoy doing auto mechanics at home for anyone that needed his assistance, knowledge and expertise. He worked for the Kroger Company from 1946 – 1951. He is a United States Army Veteran, having proudly served from December 1951 – December 1953 as a Non-Commissioned Officer in both the 3rd Armored Division and the 6th Regimental Combat Team (“Fighting Sixth”), Company D, 2nd Battalion, 6th Armored Cavalry, where he served as a tank mechanic, defending the eastern border of Germany and Czechoslovakia with outpost duty on the “easternmost outpost of democracy”. Dick loved spending time with his family camping, the outdoors, working in his yard, auto-mechanics, and was an avid woodworker, having made baby cradles for each of his children when their first child was born, which are now being passed down to the next generation upon the births of his great-grandchildren. He was married to Carol Marie (McDonnell) Schultz on July 2, 1955, and was married for 58 wonderful years until Carol’s passing on July 31, 2013. He was preceded in death by his parents and brothers, John “Jack” Schultz and Donald “Don” Schultz; sister Susie Kekes, and son-in-law James “Jim” Francis. Dick was the loving and proud father of Catherine “Cathie” (Gary) Francis-Martin, Richard “Rick” (Teresa) Schultz, Gordon “Gord” (Kim) Schultz, Gregory “Greg” (Cindi) Schultz and Eric Schultz. He was the proud brother to Kenny (Kathy) Schultz; grandchildren Christina; Rick; Jason, Holly, Ian, Jennifer, Zack, Bethany, Erica, Chrissy, April, Haley and step-granddaughters Christina, Jessica and Meghan. He had a special place in his heart for his youngest granddaughter Erin. He also had 7 great-grandchildren and many cousins, nieces, nephews and friends. He is survived by sister-in-laws Iriz Kruez, Lois Kimberly, Sharon Ketcham and brother-in-law Marc “Marvin” Monroe. Dick was a very charitable man, always placing others before himself. He made monthly contributions to his four favorite charities - Catholic Charities Diocese of Toledo; Cherry Street Mission Ministries; Toledo Northwestern Ohio Food Bank & St. Jude's Children Hospital. Visitation for Dick will be Monday, October 9, 2017 at Ansberg West Funeral Home, 3000 Sylvania Avenue, Toledo, OH, (419) 472-7633 from 4:00 – 8:00 PM. Visitation will continue on Tuesday, October 10, 2017 at Corpus Christi University Parish, 2955 Dorr Street, Toledo, OH (419) 531-4992, from 8:30 AM until time of funeral service, beginning at 10:00 AM. Interment will follow at Resurrection Catholic Cemetery. Memorial contributions may be made to the American Legion or Hospice. To leave a message for Dick’s family, please visit www.ansberg-west.com . The family would like to give a special heartfelt thank you to his caregivers Cindi, Cathie and Gordon, and Hospice Nurse Terri and Aide Dixie. May Dick rest in peace, rejoice in the reunion with his wife Carol, and continue to provide his wisdom and guidance upon his loving children and families. WE LOVE YOU!!

The family of Richard Charles Schultz created this Life Tributes page to make it easy to share your memories.