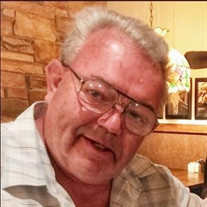 Richard L. Smith, 74, of Perrysburg, lost his battle with COVID 19 on December 31, 2020. He was born to Robert V. and Vesper F. (Handy) Smith on September 22, 1946. Rich grew up in the Old North End. He attended Stickney Elementary and graduated from Woodward HS in 1964. As a young man he enjoyed drag racing and riding dirt bikes. He began his career as a Tool and Die Maker at Nash Tool & Die. After several years he moved to Right Tool & Die. He was accomplished in his field and trained many apprentices throughout his 40-year career. He also served several years on an advisory group for Penta Career Center, keeping them abreast of changes in the trade and suggesting changes to the curriculum to meet those needs Rich married the love of his life Michele Schramm in September 1968. Two daughters followed over the next 5 years. Rich coached basketball and other sports for his girl’s teams at St. Catherine’s. He also enjoyed watching the girl’s during travel volleyball and softball as well as collegiate basketball. He was proud father and attended all of their games. The Smith driveway was the locale for many a spirited game of basketball with his girls and the neighborhood kids. The backyard served as the neighborhood volleyball court. In his later years he enjoyed collecting Hot Wheels, Matchbox die cast, slot cars and trains. He and Michele enjoyed attending flea markets and garage sales searching for rare and unique treasures. He was an avid fisherman, even in his own backyard. He continued riding dirt bikes and went on many trips up north with groups of friends. He loved spending time with his four grandkids and was a wonderful grandpa. He was preceded in death by his parents, and mother-in-law, June Benner. He is survived by his wife, Michele; daughters, Kimberly Lauch and Jackie (Jim) Purtee; grandkids, Blake and Brooke Lauch and David and Jacob Purtee; brother, Tom (Michelle) Smith and nieces, Erica (Tony) Dworznik and Sarah (Derek) Yundt. A celebration of Rich’s life will be planned for a date later in the year. Ansberg-West Funeral Directors (419) 472-7633.

Richard L. Smith, 74, of Perrysburg, lost his battle with COVID 19 on December 31, 2020. He was born to Robert V. and Vesper F. (Handy) Smith on September 22, 1946. Rich grew up in the Old North End. He attended Stickney Elementary and graduated... View Obituary & Service Information

The family of Richard L. Smith created this Life Tributes page to make it easy to share your memories.

Richard L. Smith, 74, of Perrysburg, lost his battle with COVID...