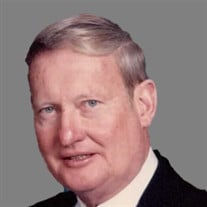 Richard J. “Dick” Sullivan, 88, of Fort Lauderdale, FL and Toledo, OH passed away in Fort Lauderdale on April 14, 2020 after a short illness. Dick was born in Toledo on Tuesday, November 14, 1931 to John and Mary Ann (Hanley) Sullivan who both emigrated from Ireland. Dick graduated from Rosary Cathedral Catholic School and Central Catholic High School in Toledo in 1949. After graduating with a BBS from John Carroll University (Cleveland) in 1953, he returned to Toledo, worked part time and earned a JD from the University of Toledo College of Law in 1957. Dick married Mary Gerstl, a fellow graduate of Central Catholic High School, in 1955. Dick opened a private legal practice in the Spitzer Building where he worked over 40 years until he retired and moved to Florida. While Dick was sparing with words, he was a great story and joke teller. He was an avid golfer and his golfing buddies and their wives often visited Mary and Dick in Fort Lauderdale. Dick enjoyed his beer. One of his claims to fame was identifying brands of beer when blindfolded. He was strong in his religious beliefs and was an active parishioner of St. John the Baptist Catholic Church in Fort Lauderdale and St. Pius and St. Catherine of Siena in Toledo. He was generous to these parishes as well as Central Catholic High School and John Carroll University. Dick was a member of the Knights of Columbus, the Colony Men’s Club and the Lucas County and Ohio Bar Associations. For seven years Dick partnered with John Mohr in running a neighborhood bar on Central Avenue, “Johnny Mohr’s.” Dick was preceded in death by his wife; sister, Irene Sullivan; and brothers, John J. Sullivan and his twin brother, Robert E. (Bob) Sullivan. Dick is survived by his special friend, Rose Marie Siefert; sister-in-law, Marcia Sullivan; nieces, Molly Sullivan, Sheila Sullivan; nephews, Deacon Tim Sullivan, Michael Sullivan, Brian Sullivan and David Sullivan; cousins, John Hurley, Jim Hurley, the Whiddens and their families as well as cousins in Ireland. A private funeral mass was held at historic St. Patrick’s Church on Friday, April 24, 2020 and was officiated by Reverend Gary Walters with burial at Calvary Cemetery. Special thanks to Dick Stahl and Larry Minor for assisting with funeral arrangements and to the pall bearers. Donations can be made in Dick’s memory to Central Catholic High School.

The family of Richard J. "Dick" Sullivan created this Life Tributes page to make it easy to share your memories.