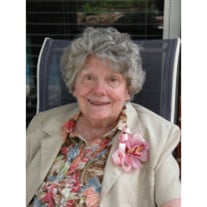 Rita Dolores Esker Brunner passed away on Saturday, June 23, 2012 at the Odyssey Care Unit at the Hampton, Houston, Texas. Mrs. Brunner was first and foremost a loving mom and wife, grandmother, great-grandmother and kind and giving friend to all who knew her. Rita believed each one of the family members had their own strengths, abilities and talents. She told them often how much she loved them and how proud she was of them. Born on October 5, 1919 in Akron, Ohio, to Carl and Mary Esker, Rita attended St. Bernard Elementary School and graduated from South High School, Akron. She later attended Actual Business College, working as an accounting assistant with the WPA before her marriage to Ervin Brunner in 1940. While her husband Erv was serving in the Army during WW II, Rita was active in the Women's Auxiliary of the VFW and even marched and played in their band. She later moved with her husband and three children to Cleveland, Ohio and later moved again with their four children to Toledo, Ohio when her husband Erv was promoted to Manager of Nabisco. While living in Toledo, Rita was very active in the Christ the King Parish community serving as the Rosary Altar Society President, a member of the Parish Council, faithful Sacristan (40 years), and also a Girl Scout leader and Den Mother for her children. She was a proud and active member of the Third Order of the Carmelites (Discalced), serving as secretary and praying daily for family, friends, and all who were in need. Rita's hobbies included bird watching and baking for others ??" especially her family. Favorite “Rita treats” included frosted anise cutout cookies, strawberry festival cakes, luscious lemon bars and sour cream coffee cakes. Rita was preceded in death by her husband of 52 years, Erv (1992) and is survived by her four children and their spouses: daughter Mary Louise McKenna (Ed) of Commerce City, Colorado, daughter Rita Diane Davidson (Art) of Lincoln Hills, California, son Don Brunner (Kathy) of Ventura, California, and son Paul Brunner (Susan) of Spring, Texas where Rita had been residing for the past 2 ½ years. She is also survived by her grandchildren Anne, John, Theresa, Jennifer, Matthew, Kristin, Jeffrey, Karla, Kimberly and Laura, and great-grandchildren Victoria, Carly, John , Mattie, Carson, Charlie, Maya, Annabelle, Michael, Kathryn, William, Lily, Paul III, Craig, Timothy, Anthony, Daniel, and triplets Lauren, Madelyn and Ryan. The family would like to give special thanks to Dora Salinas, Rita's faithful companion and caregiver for the past two years. Mass of Christian Burial will be celebrated 1:30 PM Saturday, at Christ the King Church, 4100 Harvest Lane, Toledo, Ohio, with entombment at Resurrection Cemetery and Mausoleum. The family will receive friends from 4-8 PM Friday at the Ansberg-West Funeral Home, 3000 Sylvania Avenue where recitation of the Rosary will begin at 7 PM.

Rita Dolores Esker Brunner passed away on Saturday, June 23, 2012 at the Odyssey Care Unit at the Hampton, Houston, Texas. Mrs. Brunner was first and foremost a loving mom and wife, grandmother, great-grandmother and kind and giving friend to... View Obituary & Service Information

The family of Rita Dolores Brunner created this Life Tributes page to make it easy to share your memories.