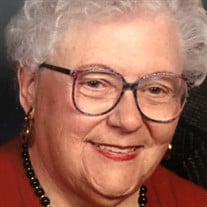 Rita (Pecord) Longenecker passed away with family by her side on January 3, 2021 at Otterbein Sunset House in Toledo, Ohio. Rita was born on October 28, 1926 to Oliver and Mary (Missler) Pecord in Toledo, Ohio. From ages one to eleven years she lived in Sandusky, Ohio before moving back to Toledo to finish grade school and graduate from Central Catholic High School in 1944. After high school, Rita began nurses training at the St. Vincent’s School of Nursing where her mother, Mary Missler, had graduated in 1925. She was sponsored by the US government as a Cadet nurse to prepare for becoming an RN in the armed forces during WWII, but the war had ended before her graduation on May 10, 1947. After graduation, Rita worked in the hospital’s nursery until beginning her own family. While in nurses training, she met her husband, Clinton R. Longenecker, Jr. through her father-in-law. Their first date was going dancing at a large popular 1940s dance hall with live bands and their love of dancing continued throughout their marriage. They were married on October 30, 1948 in the Rosary Cathedral chapel by Rita’s uncle the Rev. Otmar Missler CPPS. In the 1960’s, Rita returned to her nursing career doing private duty and then, in the early 1970’s, worked again at St. Vincent’s on a medical surgical unit. For twelve years (‘77-‘89), she worked at St. Charles Hospital and retired after 45 years in nursing in 1995 from the former Toledo Mental Health Hospital after working six years there. Following retirement, Rita and her husband, Clint, co-chaired the Blessed Sacrament Church Red Cross blood drives for seven and a half years and she also served as the parish nurse there for many years. Rita volunteered at the St. Vincent’s Medical Center beginning in 1990 and for ten years, starting in 2000, in the St. Anne’s Hospital emergency room. She was a member of the St. Vincent’s Alumni Association and a past vice- president of the Blessed Sacrament Seniors Association and the Salesian Club. Rita and Clint loved traveling throughout all 50 USA states and Europe. They enjoyed thirty happy years at their summer cottage near Reading, MI with their children and grandchildren. Rita is survived by her four children, Marsha (Warren) Hunt, Dr. Clinton (Cindra) Longenecker, Dr. Paul (Susan) Longenecker and Richard (Deborah) Longenecker; as well as ten grandchildren, Neil, Ellen, Christopher (Katie), Adam, Laura, Clinton, Shannon (Nathan), Stephen (Gabby), Kayla and Jack; and three great-grandchildren, Katelynn, Christopher, and Oliver. Rita was preceded in death by her loving husband of 69 years, Clint, and daughter, Yvonne. There will be no visitation. A memorial mass & graveside service will be held for immediate family. Donations can made in Rita’s name to Central Catholic High School and will be appreciated. To view the video of Rita’s Graveside Service, please click here.

Rita (Pecord) Longenecker passed away with family by her side on January 3, 2021 at Otterbein Sunset House in Toledo, Ohio. Rita was born on October 28, 1926 to Oliver and Mary (Missler) Pecord in Toledo, Ohio. From ages one to eleven years... View Obituary & Service Information

The family of Rita (Pecord) Longenecker created this Life Tributes page to make it easy to share your memories.

Rita (Pecord) Longenecker passed away with family by her side...