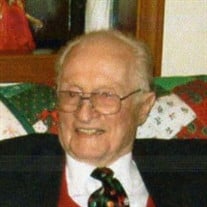 Robert H. Balduf, 92, passed away on Sunday, June 10, 2012, surrounded by his loving family. He was born to John P. and Mabel Balduf in Toledo, Ohio on February 23, 1920. Bob graduated from DeVilbiss High School in 1938. He then attended the University of Toledo prior to joining the Army where he served as a sergeant and medic in the 29th Evacuation Hospital Semi-mobile. He served three and half years in the South Pacific Theater as part of the Island Hopping Campaign. He earned the Bronze Arrowhead, Asiatic-Pacific Theater Ribbon with three Bronze Stars, Philippine Liberator Ribbon with one Bronze Star, Good Conduct Ribbon, Meritorious Unit Award, and the World War II Victory Medal. After returning from WWII, he briefly worked with his father and uncles at theBalduf Bakery before going into the paving business. Initially, he worked for Geddis Brothers Paving and then spent over 50 years working as an estimator for Bowers Asphalt and Paving, retiring at age 89. Bob was a mason of the Robinson-Locke Lodge, Zenobia Shrine and Scottish Rite (54 years) as well as amember of the American Legion, Conn-Weisenberger Post. Bob and his wife traveled extensively throughout the US and the world including 25 trips to England. A recent Honor Flight trip was a great delight for him. Bob was a member of the Friendship Force and participated in many Elder Hostel programs. He was preceded in death by his parents, John and Mabel, step-mother Lillian and siblings Richard Balduf, Nancy (Gene) Charles and Dan Quilter. He is survived by his loving wife of 62 years, Jane; siblings John (Georgette) Quilter, Kathy (Dan Quilter) Sideli, Jeanne (Richard) Balduf; sister-in-laws JoanneShue, Jeri (Jerry) Heineman; his children Bonnie (John) Hodak, John (Linda) Balduf, and Robert “Corky” (Karen) Balduf; his grandchildren Kerry (Richard Arnold) Hodak, Alex, Adam and Matt Hodak, Tara, Justin and Jeromy Balduf, Andrew, Megan, and Kristian Balduf; and great-grandson John Robert Arnold. He took great joy in spending time with his family whom he loved dearly. Bob will be greatly missed by his family and friends. The memorial service will be held on Saturday, June 23, 2012 at 10:30 a.m. at St. Andrew's Episcopal Church where Bob was a longtime parishioner. In lieu of flowers, the family suggests contributions to the St. Andrew's Episcopal Church Altar Guild.

Robert H. Balduf, 92, passed away on Sunday, June 10, 2012, surrounded by his loving family. He was born to John P. and Mabel Balduf in Toledo, Ohio on February 23, 1920. Bob graduated from DeVilbiss High School in 1938. He then attended the... View Obituary & Service Information

The family of Robert H. Balduf created this Life Tributes page to make it easy to share your memories.