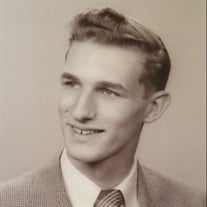 Robert “Bob” Meegan passed away peacefully in his home on Tuesday, November 5, 2019. Bob was born on May 10, 1935 in Buffalo, New York to Joseph and Dorothy (Miller) Meegan. They moved to Toledo when Bob was young for his father’s work on the railroad. Bob began a 46 year career with the Kroger Company as a stock boy at the age of 16 and became one of the oldest store managers before retiring in 1997. He cherished the wonderful friendships he made with fellow Kroger employees and continued to meet with retired managers at monthly luncheons. After retirement, Bob started his career as taxi driver for his grandchildren and their sports activities. He is remembered for never missing a game and shouting encouragement from the sidelines. Bob met Margie Ray in the third grade at St. Anne’s grade school and reunited with her in High School at Central Catholic. Bob and Margie are both proud 1953 graduates of Central Catholic High School where they enjoyed alumni gatherings, tailgating and rooting for the Fighting Irish. The Meegan’s were loyal parishioners at St. Agnes Parish until it’s closing in 2005 then became very involved parishioners at St. Catherine of Siena Parish. You could find them helping out at a fish fry and at funeral dinners. Bob is survived by his loving wife of 64 years, Margie Meegan; his son, David Meegan and daughters, Linda Meegan and Lori (Chuck) Stein. Two grandchildren, Maggie Stein and Chuckie Stein. He was raised as a brother to Don Bleasdale and Patsy Bragg and they survive as well as many nieces and nephews. Mary Rossler is his one surviving sister-in-law. Bob was preceded in death by his brothers; sisters-in-laws and his parents. Family and friends are invited to visit on Sunday, from 2-8 p.m. at the Ansberg-West Funeral Home, 3000 Sylvania Avenue, (between Secor and Douglas Roads), where a scripture service will be held at 7 p.m. Prayers will begin on Monday at 9:30 a.m., from the funeral home, followed by the funeral mass at 10 a.m., at St Catherine of Siena Church, 4555 North Haven Avenue, Toledo, OH 43612. Interment will follow at Calvary Cemetery. Memorial contributions may be made to St. Catherine of Siena Church or Central Catholic High School, 2550 Cherry Street, Toledo, OH 43608. Online condolences may be sent to Bob’s family at www.ansberg-west.com You will be missed Papa but until we meet again, may God hold you in the palm of his hand.

The family of Robert "Bob" J. Meegan created this Life Tributes page to make it easy to share your memories.

Robert “Bob” Meegan passed away peacefully in his home on Tuesday,...