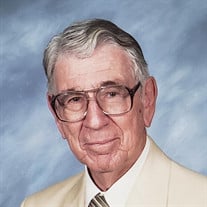 Robert John (Bob) Miner Sr. of Toledo, Ohio passed away on March 5th, 2019 at the age of 94 at the Ohio Living Swan Creek Retirement Community. He had been under hospice care there for several months. Bob was born July 21, 1924 to parents Benjamin R. and Melba V. Miner. A lifelong Toledo resident, he graduated from DeVilbiss High School, attended the University of Toledo and graduated from Marquette University in Milwaukee with a degree in Mechanical Engineering. Bob enlisted in the Navy and was commissioned as an Ensign at the Notre Dame midshipman’s school. He served on active duty from 1942 to 1946 and for several years after WW II in the reserves. On February 7, 1947 he married Mary Alice Bauer. Bob worked for the Libbey Glass Division of Owens-Illinois Inc. for 40 years in a variety of management positions in Production and Engineering at the north Toledo plant, and for 2 years as a consultant in England. He was active in many organizations including the Boy Scouts of America (troop chairman), the Toledo Management Association (President), National Management Association (National President), Optimists Club of North Toledo, Toastmasters International, and American Legion Toledo Post #335. After retirement, he volunteered for many years at the Toledo Hospital. He was a member of Monroe St. United Methodist Church since 1957. He enjoyed many hobbies including woodworking, golf, piano, and travel. Bob was preceded in death by his loving wife of 48 years Mary Alice (Bauer) Miner, his second wife Thana Hudson and his grandson Phillip Edwards. He is survived by three children: Robert John Miner Jr. (John) (Melanie) of Austin, Texas; Barbara Miner Neff (Denny) of Houston, Texas and Beverly Miner Edwards of Dayton, Ohio. Four grandchildren: Jillian Miner Wolfe (Christopher); Benjamin Miner (Michelle); Kendra Edwards Bean (Dave); and Christopher Neff and two great grandchildren: Madeleine Wolfe and Liam Bean. He is also survived by brother-in-law the Reverend Arthur Bauer (Danita), nieces, great nieces and nephews. A memorial service and celebration of life will be held in the chapel at the Ohio Living Swan Creek Retirement Community, 5916 Cresthaven Ln., Toledo, Ohio on Saturday March 16th at 11:00 a.m. The Reverend Melanie L. Miner (daughter-in-law) will preside. Visitation will precede the service beginning at 10:30 a.m. and continue following the service with a luncheon. Arrangements have been entrusted to the Ansberg-West Funeral Directors, 419-472-7633. To send Bob’s family online condolences, please visit www.ansberg-west.com.

Robert John (Bob) Miner Sr. of Toledo, Ohio passed away on March 5th, 2019 at the age of 94 at the Ohio Living Swan Creek Retirement Community. He had been under hospice care there for several months. Bob was born July 21, 1924 to parents... View Obituary & Service Information

The family of Robert (Bob) J. Miner created this Life Tributes page to make it easy to share your memories.