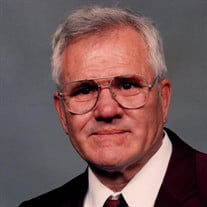 Robert T Boggs, Sr., 85, of Toledo, Ohio passed away peacefully Friday, October 15, 2021at St. Vincent Medical Center. Born October 11, 1936, he was the son of Robert and Lucille (Cox) Boggs. Surviving is his previous wife, Essenia (Cindy); children, Robert, Jr. (Christine) and Nicholas Boggs; step-children, Leroy Quigg, Marshall Hill, and Charlene Snyder (John); step-grandchildren, Kevin, Justin, Kaylee, and Caleb; sister, Judith Mechler, and nieces Karen Miller, Sue Satkowski, and their families. He was preceded in death by his parents and his brother-in-law, David Mechler. Visitation will be from 10:00am at Ansberg-West Funeral Home, 3000 W. Sylvania Ave., Toledo, Ohio, where a memorial service will immediately follow at 12:00pm. Interment will follow at Woodlawn Cemetery, Toledo, Ohio. A celebration of Bob's life will be held at a later date. The family wishes to thank the nurses and physicians of St. Vincent Medical Center for their loving care of Bob during his time of illness, as well as a special thank you to Edna Weegmann. In lieu of flowers, donations can be made in Bob's name to The National Fallen Officer Foundation.

The family of Robert T. Boggs Sr. created this Life Tributes page to make it easy to share your memories.