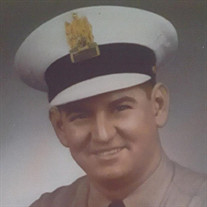 Robert E. Carter, age 94, passed away during the early hours of February 7, 2022, at the Kingston Care Center in Sylvania, Ohio. During the Post WW2 Era, he served in the Navy. He began writing to the woman who he would marry. They would remain married for 61 years, till death they did part. After being discharged from the Navy, he worked as a steel hauler, doing short trips in the Midwest. In 1952, he joined the Toledo Police Department. He was also in the US Naval Reserve. During his time on the department, he also served with four other officers, as negotiators, as a member of the Fraternal Order of Police. He would eventually serve as President of the FOP, as well as several other Offices. He retired from the Department at the rank of Sergeant. He worked the streets, the desk in the Safety Building, and the Turnkey (jail). In the Naval Reserve, he achieved the rank of Chief, E9, referred to as a Super Chief. He retired from the TPD in 1976. He retired from the Reserves in 1977. His retirement was active. He spent his time, with his wife, traveling to Florida to fish and meet up with friends that they made down there. He spent time with his grandchildren. He also got around to having a house built that he promised his wife. He was active in FOP Lodge #40 throughout his retirement. He was preceded in death by his wife, Margaret Ann Carter. Surviving are his sons, Robert Carter II (Pamela) and Bruce Carter (Linda). His grandsons, Robert Carter III and Andy Carter (Andrea); his great grandchildren, Anastasia Carter, Aiden Carter, Abigail Carter, Nick Finkbeiner, and Kelsie Finkbeiner. Honorable mention of grand doggies, Levi, Sanibel, and Moose! Friends are invited to visit from 3:00-8:00PM on Wednesday February 16, in the Ansberg-West Funeral Home, 3000 W. Sylvania Ave. where funeral services will begin at 11:00AM Thursday. Rev Tyler Dunlap Officiant. Military honors will immediately follow at Ottawa Hills Memorial Park. Those wishing to make memorial contributions are asked to consider St. Jude's Children's Hospital or Shriner's Hospital for Children.

Robert E. Carter, age 94, passed away during the early hours of February 7, 2022, at the Kingston Care Center in Sylvania, Ohio. During the Post WW2 Era, he served in the Navy. He began writing to the woman who he would marry. They would remain... View Obituary & Service Information

The family of Robert E. Carter created this Life Tributes page to make it easy to share your memories.

Robert E. Carter, age 94, passed away during the early hours...