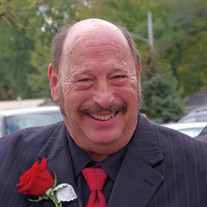 Robert W. Gray, 67, passed away unexpectedly in his West Toledo home on January 20, 2019. He was born in Toledo on June 5, 1951 to Shirley A. (Spilker) and Cortez Gray. He is survived by his loving wife of 41 years, Patricia (Patty) L. (Cook); children, Chad R. (Stefanie Kuhr), Jason R. and Christopher L.; grandchildren, Julian R. (11), Madison A. (10), Mitchell R. (9) and Kylei A. (8); siblings, Dan and Kathy and is preceded in death by his brother, Pat. Bob was born and raised in West Toledo, a graduate from Start High School, Class of 1969. He worked a few places here and there, but for the last 20 plus years he has been employed with the Daimler Chrysler Assembly Plant in Perrysburg. He helped coach his sons in multiple youth sports, but was particularly involved with his son Jason and the Special Olympics. His most favorite thing to do with his family was to go camping…started out with a tent, then a pop up, onto a fifth wheel. He wanted to be sure there was always room for his children and grandchildren to join Patty and him. KOA and the 419 Camping Crew will miss Papa Bob and the set-up he would do at his site to make all feel welcome. He would need to be reminded; he did not have to cook for the whole campground! When they were not camping, spontaneous gatherings would often pop up in their backyard oasis. His love of cooking was also carried out at home. Patty always knew what was for dinner by the mess he would leave in his trail on the floor, counters, table…everywhere! A few things that will be missed most; his MIS trips with his best friend Roger Brown; his running around in his bright yellow Ram; his daily shopping at Kroger picking up Jay and his Wednesday night hang out at Carmel’s. As his grandson Mitch said, “Carmel’s lost one great customer.” The families favorite memory of Bob is whenever their favorite song Crazy by Patsy Cline came on, he would drop whatever he was doing and begin dancing with Patty. Friends are invited to visit from 3:00 to 8:00pm on Thursday January 24, 2019 in the Ansberg-West Funeral Home, 3000 W. Sylvania Ave. where funeral services will begin on Friday at 11:00am. Burial will follow in Toledo Memorial Park Cemetery. Those wishing to make memorial contributions are asked to consider the Special Olympics. To send his family online condolences, please visit www.ansberg-west.com.

The family of Robert W. Gray created this Life Tributes page to make it easy to share your memories.

Robert W. Gray, 67, passed away unexpectedly in his West Toledo...