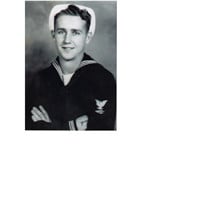 Robert J (Bob) Kranz passed away peacefully on Friday morning in the loving medical care of Toledo Hospital. He was 90. Bob was born to Karl and Mary (Gfell) Kranz on 7/18/1924. He attended Central Catholic High School, and joined the Navy after graduation. Bob served his country in World War II, seeing active duty on the USS Haynesworth and the USS Mulaney as an Electronic Technician’s Mate. Bob married Margaret Ann Davies on April 3, 1948. Together they raised five children in a warm and loving home. Bob began to work in the family business, PJ Kranz Insurance, shortly after college, became a partner, and then the sole owner in 1979. He continued to be active in the business until just recently. The business survives through his children Rick, Joe and Karen. Bob served his community through the Knights of Columbus, The Catholic War Veterans, and served as a 27 year director and Past-President of the St Clements Credit Union (now Directions Credit Union). Throughout his life, Bob was an avid hunter, fisherman and golfer. He was a skilled card player, excelling in Bridge, Gin Rummy, and, sometimes by necessity, Poker. Later years were spent fly fishing at Slagle Trout Club near Cadillac Michigan, where his grandfather took him as a child in the 30’s, and where Bob later taught his children, grandchildren and great grandchildren how to throw a line and follow the rules. He also served on the Board of Directors and numerous committees. Bob was preceded in death by his parents and his brother Don. He is survived by his wife of 66 years Midge (Margaret Ann Davies), brother Paul, his children Bob, Rick (Judy), Karen Balcerzak (Frank), Joe (Julie) and Jeff (Donna), and dozens of grandchildren and great grandchildren. Family and friends are invited to pay their respects after 9:00 prior to 10:00 mass at Christ the King Church on Tuesday, September 16. The family suggests memorial contributions be made to Little Sisters of the Poor or Central Catholic High School.

Robert J (Bob) Kranz passed away peacefully on Friday morning in the loving medical care of Toledo Hospital. He was 90. Bob was born to Karl and Mary (Gfell) Kranz on 7/18/1924. He attended Central Catholic High School, and joined the Navy after... View Obituary & Service Information

The family of Robert J Kranz created this Life Tributes page to make it easy to share your memories.