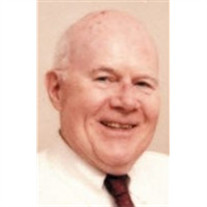 Robert "Bob" Morris, 85, went with the angels surrounded by his family Thursday April 4, 2013. The son of Robert T. and Florence G. Morris, he attended DeVeaux Park elementary school, Culver Military Academy, where he graduated with honors and was a graduate of the University of Toledo College of Business Administration and college of Law. He honorably served his country in the Navy. Bob was admitted to practice law in Ohio in August 1951 and retired in 2005 after 54 years of practice. He was a member of the Toledo, Lucas County and Ohio Bar Associations, former trustee of the Toledo Bar Association and recipient of the Robert A. Kelb Distinguished Service Award, he also served on the Toledo Bar Association Professionalism Committee for 15 years. He was a delegate to the Ohio Conclave on Legal Education, was a distinguished life fellow of the Ohio State Bar Association, receiving the 2001 Ritter Award for significant contributions to the justice system and was Master of the Bench in the Morrison R. Waite Chapter, American Inns of Court. Bob was a Past Master of Sanford L. Collins F&AM, member of the Scottish Rite, was Past President of the Downtown Toledo Exchange Club, was a member of the Thaddeus Walinski History Group and was co-founder and first president of the Civil War Round Table of Toledo. He was the former Chairman of the Executive Committee of the National Association of Congregational Christian Churches and former trustee of Congregational Foundation for Theological studies. Bob served for mare than 22 years as trustee of the Lucas County Chapter of the American Heart Association and was the recipient of the American Heart Association Time, Feeling and Focus Award for outstanding volunteer service. A regular contributor to the Blade readers forum and Saturday essay column, his hobbies included, reading history, listening to classical music, target shooting and collecting and painting military miniatures. Bob was preceded in death by his wife of 52 years, Mary Morris and faithful dog Charlie. He is survived by his wife, Janet; daughter, Rosemary (Molly) of Toledo; son, Thomas (Leslie) of Arlington, VA; grandchildren, Robert, Peter and Hannah Morris and best buddy Lucky. Services will be 11:00am Tuesday at the Ansberg-West Funeral Home 3000 Sylvania Avenue where friends are invited to visit from 1:00 to 8:00pm Monday. A Masonic service will be conducted 7:00pm Monday evening. Interment in Ottawa Hills Memorial Park. Memorial contributions may be made to the American Heart Association or Toledo Bar Association Foundation in lieu of flowers. Condolences can be left online by visiting www.ansberg-west.com

The family of Robert G Morris created this Life Tributes page to make it easy to share your memories.

Robert &quot;Bob&quot; Morris, 85, went with the angels surrounded by his...