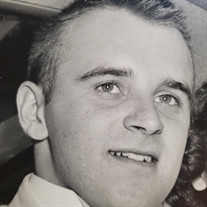 Robert “Papa” Fink Robert L. Fink, passed away peacefully on his 95th birthday in the presence of his family. Born in Toledo, Robert attended Scott High School. After high school, Robert served in the U.S. Army and was honorably discharged, following America’s victory in Japan. After the war, Robert married his childhood friend and neighbor, Mary Ann Fial. Robert and Mary Ann were married for over 50 years. They had one daughter, Laura. Robert was a dedicated mail carrier for the United States Postal Service for 30 years, retiring at the age of 62. Robert’s proudest accomplishment was being a father and grandfather. Papa always “delivered” for his family. Robert was a rock when his family needed him the most. Robert had a great sense of humor, and a memorable laugh, He volunteered in the pro-life movement, followed politics closely, and always filled out the daily crossword puzzle while watching the news, a tennis match or boxing. Robert loved his dogs, often bringing strays home from his mail route. He always managed to take them in and often times, made a home for them. Later in life, Robert met a dear companion, Barbara Nolan. Together, they enjoyed singing at the Sylvania Senior Center, going out to eat, and spending time with family. Robert is preceded in death by his parents, George and Florence (Furey) Fink, and his sister Donna Durand. He is survived by his sister, Sister Georgene SND, daughter Laura Draheim, his grandchildren Jake (Jenny) Fishman, Karen (Nate) Fishman-Nowels, Asher (Stephanie) Fishman, Michael (Julie) Fishman and great-grandchildren, Caitlyn, Olivia, Abel and Isla Fishman. Robert’s family would like to extend our appreciation to his many caregivers, in particular Heather and Karen with Senior Helpers and Rachel with Ohio Living Hospice. Your dedication and professionalism in his final years, gave us peace knowing he was in your care. In lieu of flowers, our family is asking that you crack open an ice-cold Coors Light, and share your fondest memory of Robert with your friends and family. We know he is in Heaven having one with you. Arrangements have been entrusted to the Ansberg-West Funeral Directors, 419-472-7633. To send his family online condolences, please visit www.ansberg-west.com.

Robert &#8220;Papa&#8221; Fink Robert L. Fink, passed away peacefully on his 95th birthday in the presence of his family. Born in Toledo, Robert attended Scott High School. After high school, Robert served in the U.S. Army and was honorably... View Obituary & Service Information

The family of Robert "Papa" Fink created this Life Tributes page to make it easy to share your memories.