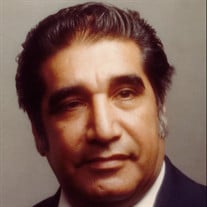 Robert Ramirez Sr., 90, of Toledo, passed away Sunday, October 25, 2020. He was born June 7, 1930, in Houston, TX and was the son of Gilbert and Inez (Martinez) Ramirez. Robert served honorably in the Army during the Korean War. He worked for... View Obituary & Service Information

The family of Robert Ramirez Sr. created this Life Tributes page to make it easy to share your memories.