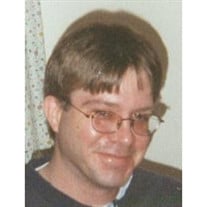 Surrounded by his loving family, Robert F. Stemen, Jr. passed away unexpectedly on August 16th, 2013. He was born on April 9th, 1973 in Toledo, Ohio to parents Dolores (Sattler) Stemen and Robert F. Stemen, Sr. He graduated from Start High School in 1992 and was employed at Daimler Chrysler for 15 years. Bob was a huge history buff and enjoyed both reading books on the subject and watching the History Channel. He was an avid golfer, a die-hard Pittsburgh Steelers fan and loved jumping into his Jeep to go off-roading. Left behind to cherish his memory are his heartbroken mother, Dolores Stemen, grandmother, whom he affectionately called “Gram”, Florence Stemen, brother, Joseph Stemen, aka “Bro”, and niece and nephew Joey Jr. and Jeni Stemen, who will miss their “Uncle Buddy” tremendously. Also surviving are his aunts, Patricia Neidigh (Don) of New Jersey, Patricia Davies of Florida, and Judith Sattler of Oregon, OH along with cousins Pam, Jimmy, Caroline, Dave and Tara. Special friends left behind include PJ Aubry, Jason Bishop and Tracy Lamkins. Waiting in heaven to welcome him with open arms are father., Robert F. Stemen, Sr., grandfather, Victor Stemen, grandmother, Cecelia Kovacs, uncle, Ronnie Sattler, and cousin, Tammy Winters. The family will receive friends on Tuesday, August 20th from 5-9 p.m. at Ansberg West Funeral Home, 3000 W. Sylvania Ave. Services will begin at 11 a.m. on Wednesday, August 21st in the funeral home, with interment following at Ottawa Hills Memorial Park. Online condolences may be left at www.ansberg-west.com Contributions in Robert' s memory may be made to The Wounded Warrior Project. (www.woundedwarriorproject.org) Bob will be remembered for his generosity, his kind heart, and his infectious smile. “Go and rest in peace now My little boy so dear For all my love and memories I will hold forever near” Love You Always, Mom

The family of Robert F. Stemen created this Life Tributes page to make it easy to share your memories.