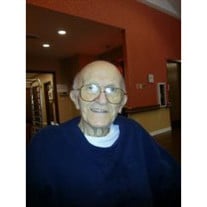 SZKUTNIK Robert Joseph Robert “Bob” Joseph Szkutnik (aka “Scooter”) 91, passed away Saturday June 20. Bob was born December 19,1923 to John and Katarzyna (Liwinski) Szkutnik, both immigrants from Poland. Bob was a 1941 graduate of Libbey High School. He then pursued a career in metalworking, and a tool and die apprenticeship. He joined the war effort two years later, serving in the Navy from 1943 to 1946. Aboard the USS Mertz DD-691, Bob was a part of a destroyer squadron (Desron 54). The Mertz and crew were credited with 10 battle stars and earned many honors, engaging directly in such historic and pivotal battles as Iwo Jima and Okinawa. Bob was aboard the Mertz for two and half years, and for every single leg of the ship's 175,000 miles of commissioned service. Bob and two partners founded Dun-Rite Industries, Inc. in 1957. Skilled tradesmen, the trio built the original cement block building that still stands today. Bob ran the manufacturing side of the operation. The company moved into larger facilities, but remained in Toledo until he retired in 1993. Over his career, Bob trained scores of diemakers, moldmakers and skilled tradesmen – including his three youngest sons, each son becoming an engineer later in their own careers. Bob's company and apprenticeship program were held in high esteem, its graduates spawning many local, successful companies in related businesses. He was well known as a perfectionist, necessary for career-long success in that industry. Bob earned the respect of many young men under his tutelage, and many - including the very first apprentice trained at Dun-Rite – had moved on, but maintained regular contact with Bob through life. Men openly shared with others that they thought of Bob like a father. Bob enjoyed golf and boating but passed on his deep passion for baseball, which he had played on a varsity level at Libbey HS. Bob also enjoyed many football, volleyball, baseball, basketball and hockey games played by his children and grandchildren. Bob was also a lover of animals and often spoke of pets dating back to his childhood. Many cats and dogs had been a part of his household over the years. He was deeply moved by the efforts of organizations which benefited the health and wellbeing of animals. Bob is survived by his second wife of 45 years, Shirley Ann (Reinbolt) Roberts and older sister, Sonia Santus of Defiance, OH. Bob was married to Virginia Czebatul who bore 6 children and passed away in 1966. Bob married Shirley in 1969. Also surviving are children, Kathleen Hoover of Toledo, Barbara Szkutnik of Battleground, WA, Bruce (MaryJane) Roberts of Toledo, Garry (Jan) Roberts of Sylvania, OH, Robert C. Szkutnik of Jacksonville, FL, Dennis (Carol) Szkutnik of Perrysburg, Jeffrey Szkutnik, of Temperance, MI and John (Karen) Szkutnik of Canton, MI; 25 grandchildren and great-grandchildren. Friends are invited to visit from 5-8 p.m. Thursday, in the Ansberg-West Funeral Home, 3000 Sylvania Avenue, (between Secor and Douglas Roads). Prayers will begin at 9:30 a.m. Friday, from the funeral home, followed by the funeral Mass at 10 a.m., at Christ the King Catholic Church, 4100 Harvest Lane. Interment will follow in Calvary Cemetery. Bob requested, in lieu of flowers, to please consider a donation to the ASPCA, in his memory. Online condolences may be sent to the family at www.ansberg-west.com

The family of Robert Joseph Szkutnik created this Life Tributes page to make it easy to share your memories.