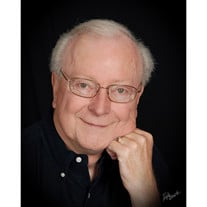 I held this amazing man in my arms for the last time on Wednesday, June 22. Dawn was approaching and the background music on Pandora was whispering "Stairway to Heaven". As he took his last breaths, the clouds parted, as if on command, creating a glowing path that traveled upward. He was being welcomed Home to his Savior. Robert Stanley Wrobel was born in Detroit, MI on November 16, 1943, to Stanley and Helen (Banas) Wrobel. Still a child, his parents moved the family to Maybee, MI, where the business Banas & Wrobel Lumber Company originated. Bob attended St. Joseph Catholic School there and Catholic Central High School in Monroe, MI where he graduated in 1961. His summers were spent at the family lake home at Wampler's Lake where he was known for his barefoot skiing and boat racing skills. Shortly thereafter he enlisted in the United States Air Force, where he was stationed primarily at Ipswich Air Force Base in England. After four years of honorable service, he returned home to Monroe where he met the love of his life Bonnie Kiebler. They were married on August 30, 1968 and lived an incredible life together. God blessed them with two beautiful children Kelly Lynn and Jeffrey Scott. Bob continued his education at the University of Toledo, earning double degrees in both Business and Engineering. Upon graduation he began his life long career with General Motors Powertrain Division here in Toledo, where he excelled as a Mechanical and Production Engineer. His creative and timeless efforts helped to make this plant one of the most productive and profitable in the entire Corporation. He retired in June 2007 from Powertrain Division Headquarters in Ypsilanti, MI, celebrating a 39 year career with GM. His adorable grandchildren Nikolai, Helena, John and Jaxson affectionately called him Boboo, the name now prominently used by many friends and family members. Others close to him will always remember him as Bobby. Preceding him in death were his parents Stanley and Helen and infant son Michael. To cherish his beautiful memory is loving wife Bonnie, children Kelly (Andrei) Kotchetov, Jeffrey (Jill) Wrobel, grandchildren Nikolai and Helena Kotchetov and John and Jaxson Wrobel, brother Frank (Joyce) Wrobel, sister Elaine (Richard) Jones and "Mom" Ruth Kiebler. The family wishes to acknowledge the ICU and Fourth Floor "C" doctors and nursing staff, especially Keisha, at UTMC for the compassionate care given to Bob during his brief stay there. Words cannot express the quality care he received. We thank you so much. Honoring Bob's wishes, there will be no visitation. A Celebration of his Life will be held at a later date. Anyone wishing to make a donation in his name, please consider the Juvenile Diabetes Association, Cutie's Fund, the Devoted Barn in Newport, MI, or a charity of your choice.

I held this amazing man in my arms for the last time on Wednesday, June 22. Dawn was approaching and the background music on Pandora was whispering "Stairway to Heaven". As he took his last breaths, the clouds parted, as if on command, creating... View Obituary & Service Information

The family of Robert S. Wrobel created this Life Tributes page to make it easy to share your memories.

I held this amazing man in my arms for the last time on Wednesday,...