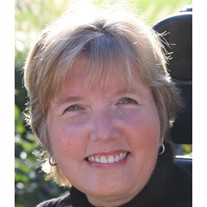 Robin Marie (Hanna) Mower gained her angel wings and is flying free, dancing and singing with the angels and her Lord. Robin no longer has ALS. Robin was born in 1964 in Toledo, Ohio to Robert and Rosemarie Hanna. She graduted from Whitmer High School, class of 1982. While in school, Robin was involved in choir and other related performing arts. After high school, Robin married, had children worked professionally but continued to pursue her love of music and acting. In 2009, Robin’s performing stage changed when she was diagnosed with ALS (Amyotrophic Lateral Sclerosis) aka Lou Gehrig’s Disease. Instead of singing and acting, Robin used her “stage” platform to bring awareness to this terrible disease. From her diagnosis she wanted to fight for a cure, to help other ALS patients and their families, and to raise ALS awareness. Robin was not shy about her disease. In fact, she wanted people to ask her about it. From speaking engagements, to fundraising events to crossing the country in their “Rolling ALS Awareness Billboard”, Robin was an ALS advocate through and through. She said she felt blessed to have the disease because it taught her so much about who she really was. Through all of this, she continued to smile. What a beautiful smile. Robin’s journey on earth may have come to an end, but her legacy and advocacy for ALS will live on until a cure is found. Never Give UP! Robin’s husband, children and grandchildren were the loves of her life. She is survived by her loving husband John, Children Jacob (Ashley) Frahn, Bittany (Andy) Stone, Lee Guardiola and Chase Mower; father, Robert Hanna; brothers, Craig (Sandy) Hanna, Don (Stephanie) Hanna, & Jeff Hanna; sisters, Laura (Fred) Nickens, Pam (Wayne) Bezeau and 8 grandchildren. Robin was preceded in death by her mother Rosemarie Hanna. Her family wishes to extend a very special thank you to Heartland of Waterville nursing home and especially Heartland Hospice for all of their love and support. Visitation will take place at Ansberg-West Funeral Home, 3000 West Sylvania Ave., Toledo, Ohio 43613 this Friday, December 1, 2017 from 2-8 pm. where prayers will begin at 10:00am on Saturday and will be immediately followed by the Mass of the Resurrection at Blessed Sacrament Church, 2216 Castelwood Drive, Toledo, Ohio 43613 with interment to follow at Woodlawn Cemetery. Monsignor Michael Billian Officiant. In lieu of flowers, donations can be made to the ALS Association or to the MDA. To send Robin’s family online condolences, please visit www.ansberg-west.com.

Robin Marie (Hanna) Mower gained her angel wings and is flying free, dancing and singing with the angels and her Lord. Robin no longer has ALS. Robin was born in 1964 in Toledo, Ohio to Robert and Rosemarie Hanna. She graduted from Whitmer... View Obituary & Service Information

The family of Robin Marie Mower created this Life Tributes page to make it easy to share your memories.