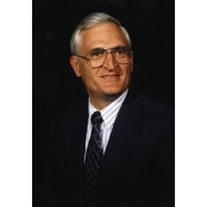 ? Ronald L. Loe, 73, passed away Tuesday, May 8, 2007 in his home.? He was born January 18, 1934 in Fostoria Ohio to Clyde and Celia Loe. ? He graduated from Fostoria High School, where he was involved with band, choir and as a cheerleader.? He received his Eagle Scout Award and was involved with scouting as a counselor and Scout Master for a number of years.? He received an Associate Business degree from Tiffin University before joining the Navy from 1954 through 1958.? He served as a Yeoman on board the oiler, Tulivana, in the Pacific fleet.? Upon leaving the Navy, he attended the University of Toledo.? He worked the next 33 years at the Ohio Citizens/National City Bank retiring in 1992.? He married Sylvania Doak in 1960 and moved to Bedford Township where he built his home.? After retiring he worked as an independent sales agent with Central Travel, along with his wife, planning trips for school groups and escorting them to their destinations.? He also spent 18 years working at Erie Orchards as a school tour guide.? He was involved in the churches where his wife, Sylvia was choir director and organists.? Including Holy Cross Lutheran, Upton United Methodist, Fairgreen Presbyterian, Faith Community UCC and First Baptist Church of Greater Toledo where he was a member for nearly 50 years.? Ron was an avid OSU fan.? ? Surviving is his wife of 46 years, Sylvia; sons, Robert (Nicole) of Temperance, Thomas (Kerry) of Temperance, Tech Sgt James (Vanessa) at Tinker AFB, Oklahoma City, OK and Christopher of Phoenix, AX; grandchildren Danielle, Ryan, Courtney, Connor, Brandon, Isabella, Tyler and Kasey.? He was preceded in death by his sister, Barbara Harpel. ? Services will be 11 AM Saturday at the First Baptist Church of Greater Toledo, 6520 Pilliod Road.? The family will receive friends from 6-9 PM Thursday and 2-9PM Friday in the Ansberg-West Funeral Home, 3000 Sylvania Avenue.? Interment Toledo Memorial Park. ? Any tributes may be made in the form of contributions to the First Baptist Church of Greater Toledo or the Hospice of Northwest Ohio. ? ? ?

? Ronald L. Loe, 73, passed away Tuesday, May 8, 2007 in his home.? He was born January 18, 1934 in Fostoria Ohio to Clyde and Celia Loe. ? He graduated from Fostoria High School, where he was involved with band, choir and as a cheerleader.?... View Obituary & Service Information

The family of Ronald L. Loe created this Life Tributes page to make it easy to share your memories.