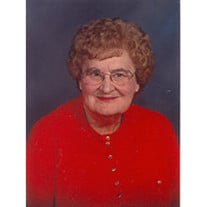 Rose T. Lister, 94, passed away on Sunday September 5, 2010 in the Kingston Residence of Sylvania. She was born in TB Maryland on May 10, 1916 to Amelia and Frank Hundsoucker. Prior to her retirement, Rose was employed at Toledo Scale and Champion Spark Plug as an executive secretary. In her position surrounded by many powerful executives, Rose was highly valued for her knowledge, ability, and organizations skills which carried into many other facets of her life. She was very intelligent, well read, and had an extensive knowledge of many subjects such as ethics, economics, politics and was never afraid to share her opinions. Her grandchildren learned this while playing Wii Trivia one evening. As they played, her granddaughters realized that she knew all of the answers and she quickly became their secret weapon. She was a devout Catholic and a longtime member of Blessed Sacrament Church. She was also a member of the Champions Retires and Compass groups. She was an avid sports fan and particularly of the Detroit Tigers. In keeping with her practices as a former executive secretary, she often organized Pinochle and Euchre games at West Park Place. Rose especially enjoyed time spent with her family and friends and was a true connoisseur of good deserts. She is survived by her loving family, son, Al (Pat) Lister; daughter Barbara (Whitey) Knannlein; daughter-in-law Pam Lister. grandchildren, Terri (Rick) Yates, Keith (Lori) Lister, Beth (David) McCabe, Steve (Margit) Lister, Diane (Geoff) Dougherty, Kris Knannlein, Lori Knannlein, Angie Knannlein, Becky (Brian) Walczak, Greg (Jaque) Lister, Mark (Sonja) Lister, Tim Lister; 21 great-grandchildren. She was preceded in death by her husband of 53 years Al Lister, and son Dale Lister. Her family wishes to extend their thanks and gratitude to the entire staff at Kingston Residence of Sylvania for the wonderful care that she received. Friends are invited to visit from 2:00-8:00pm on Thursday September 9, 2010 in the Ansberg-West Funeral Home; 3000 Sylvania Ave. Friends may also visit after 10:00am on Friday in the Blessed Sacrament Church where the Mass of the Resurrection will immediately follow beginning at 11:00am. Rev. Martin Donnelly Officiant. Interment in Calvary Cemetery. In lieu of flowers, the family asks that memorial donations be directed to the Blessed Sacrament Church, or Central Catholic High School.

Rose T. Lister, 94, passed away on Sunday September 5, 2010 in the Kingston Residence of Sylvania. She was born in TB Maryland on May 10, 1916 to Amelia and Frank Hundsoucker. Prior to her retirement, Rose was employed at Toledo Scale and Champion... View Obituary & Service Information

The family of Rose T. Lister created this Life Tributes page to make it easy to share your memories.