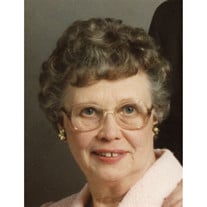 Rosemary C. Beckham June 15, 1917 - September 9, 2015 Rosemary Catherine (Wernert) Beckham, 98, passed peacefully at Sunset Village on Wednesday, September 9, 2015 with her eyes open and a smile on her face. Her last look was toward the heavens with hopes to reunite with loved ones who had passed before her including her husband of 64 years, Robert R. Beckham. Rosemary was born in Toledo, Oh on June 15, 1917 to Roy and Mary Wernert. Prior to marrying, she supervised the secretarial pool at The DeVilbiss Company. Rosemary married her husband Robert in 1945. Her true love was being a housewife and mother to her three children, Bob, Carol and Jim, as well as practicing her faith, praying the rosary and helping a homebound neighbor attend mass. Rosemary was close to her sisters and involved in the lives of her many nieces and nephews. Rosemary was also gifted with baking the most delicious apple crisp; her crisp rivaled any of Betty Crocker’s recipes. Rosemary is survived by her loving children Robert Jr., Carol Lewandowski and Jim (Kathy); grandchildren Julie (Chris), Jason (Abygail), Tim (Lisa), Brent (Jillian), Amanda (Mike) and Kaitlin (Pat); and great-grandchildren Katya, Mariska, Andrzej and Zoja. Also surviving are her sisters, Lenore Bates and Rita Pletcher. Rosemary was preceded in death by her husband Bob, her parents, and brothers Charles and James. Visitation will be Thursday, September 17, 2015 from 4 pm to 8 pm at the Ansberg-West Funeral Home at 3000 W. Sylvania Ave., Toledo, Oh. A Rosary prayer service is scheduled for 7:40 pm. Funeral Services will begin with closing prayers at the funeral home at 9:30 am Friday, September 18, 2015. The Mass of Christian burial will follow at 10:00 am at Blessed Sacrament Church at 4227 Bellevue Rd. Toledo, Oh. Interment will follow at Toledo Memorial Park Cemetery in Sylvania, Oh. Rosemary’s family would like to thank Sunset Village, especially the wonderful staff of Finlay and Overmyer Courts, and ProMedica Hospice for all of their love and care. In lieu of flowers, please consider a memorial donation to the Residents’ Assistance Fund at Sunset Retirement Communities or to the Alzheimer’s Association.

Rosemary C. Beckham June 15, 1917 - September 9, 2015 Rosemary Catherine (Wernert) Beckham, 98, passed peacefully at Sunset Village on Wednesday, September 9, 2015 with her eyes open and a smile on her face. Her last look was toward the heavens... View Obituary & Service Information

The family of Rosemary C Beckham created this Life Tributes page to make it easy to share your memories.