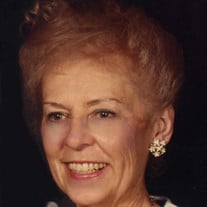 Rosemary Evelyn (Hamilton) Williams, age 102, loving widow of Dr. John Williams, mother, grandmother, cousin, and friend passed away peacefully at Swan Creek Ohio Living on Monday, June 14, 2021. Rosemary graduated from Earlham College in Richmond, Indiana in 1940, and majored in music and art. She met her future husband, John Williams, while attending Earlham, and they were married for 60 years, before John passed on. Before starting their family, Rosemary taught elementary school music and art. Their first child, Monty was born in 1942, followed by Patia, 1952, and Cherie, 1955. The family moved to Shipshewana, Indiana where John began his first medical practice. Rosemary devoted her time to homemaking and raising three children. She cooked, played piano and violin, sewed dance recital costumes, planted and harvested a yearly garden, attended Church of the Bretheran with her family, sang in the “Keynoters”, and it was very important to Rosemary that all three of her children received music lessons. Many summers, family members attended a weeklong Friends General Conference (for Quakers), held at college campuses around the country. As her children became adults, Rosemary had more free time to devote to her love of music. In 1972, the family moved to Toledo where Rosemary joined the Toledo Symphony and later the Jewish Community Center Orchestra, which then became the Sylvania Community Orchestra. She played violin until 99 years of age. It was not unusual for her to arrange a string quartet to come to her home on a Sunday afternoon and play for hours. For over 20 years, Rosemary attended the Interlochen Summer Adult Music Camp with her fellow musician friend, Cyril Zilka. Throughout those years, Rosemary made many dear friends. Rosemary grew up just west of Centerville, Indiana on the Gates family farm with her mother, grandmother, auntie, and uncle. She was an only child with one friend who lived across the field. They would meet and play at a big rock on the fence-line when their chores were done, sometimes leaving notes for one another. She remembered the smell of the homemade candies that wafted throughout the rooms of that big old farmhouse every Christmas. Because there was a persimmon tree on their farm, she learned to make persimmon pudding. The family ate “oatsy-doatsy” (oatmeal) every morning for breakfast. Rosemary was a beloved child. A special quote: “My grandma showed us all that life is vibrant and full of opportunity. She taught us to never give up on dreams and even more important, that dreams come true only with hard work and dedication. Grandma taught us the value of the arts, particularly music.” Rosemary was a sparkle among her many friends and family. Her collection of hats and turquoise tortoise-shell glasses defined her sense of fashion. The family attributes Rosemary’s longevity to alternative and functional medicine. Rosemary is preceded in death by her husband, Dr. John Williams; parents, Rose and Leland Hamilton; grandparents, William and Flora (Ranck) Gates; auntie and uncle, Elsie Mae and Everett Gates, and beloved cousins, Genevieve Munson and Graham Gates. She is survived by her son, Monty (Ginger); daughters, Patia and Cherie (Bruce Hammond); her grandchildren, Kelson Williams, James Sootheran, Colette (Matt) Anderson, and Kristi Hammond; cousin, George (Olive Mae) Ranck; nieces, nephew, and many friends. Visitation will be at Ansberg-West Funeral Home, 3000 W. Sylvania, Toledo on Friday, June 18, 2021 from 3 p.m. to 7 p.m., with the funeral service beginning at 7:30 following the visitation. A visitation will also be held at Mills Funeral Home, 405 E. Main Street, Centerville, Indiana on Saturday, June 19, 2021 from 1 p.m. to 2 p.m., with the funeral service beginning at 2 p.m. Her internment will follow the service immediately at Doddridge Chapel Cemetery, 9471 Chapel Road, Centerville, Indiana. Memorial contributions may be made to the Sylvania Community Arts - Orchestra (5725 Main St., Sylvania, OH 43560).

The family of Rosemary E. Williams created this Life Tributes page to make it easy to share your memories.