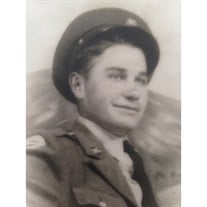 Roy W. Beeler passed into the presence of the Lord October 4, 2014 at Hospice of Northwest Ohio. He was born to Byron and Ora (Clayton) Beeler in Lawrenceburg, Tennessee, December 12, 1921. He was 92 years old. He was a World War II Army Veteran in the European Theatre with the 457th Anti-Aircraft Artillery Division. He served his country for 3 years and 4 months. He married Emma L. Kilburn February 15, 1946. They moved to Toledo, Ohio in 1951. Roy worked at Champion Spark Plug for 32 years and retired in 1983. Roy enjoyed working with his hands. He could do most anything. In addition to working at Champion, he had a lawn mower repair business. He built two homes, and a beautiful barn that was his pride and joy, and still stands today in Tennessee. He enjoyed gardening, fishing on Lake Erie and spending time with his family. He was preceded in death by his parents, three brothers, Hollis, James and Raymond and three sisters, Grace, Nola Bell, and Jewel. Their family circle is now complete in heaven. He is survived by his loving wife of almost 69 years, Emma, children; Ron (Eilleen) Beeler, Katherine (Ron) Nowak, Beth (Jeff) Younginer, Jeff (Stephanie) Beeler and grandchildren; Kevin Beeler, Jason Adamczyk, Daniel Nowak, Taylor and Maddie Younginer, Chloe, Cassidy and Cayla Beeler and great grandchildren Carson and Joshua Adamczyk and Ashlynn Kate Nowak. The family would like to thank all their wonderful and faithful friends and neighbors for all their prayers, love and support through out the last thirteen years. They would also like to thank Northwest Ohio Hospice for their care and compassion during this most difficult time. Friends are invited to visit from 4-8 P.M. Tuesday, October 7, at the Ansburg-West Funeral Home, 3000 Sylvania Avenue. Funeral services will be on Wednesday, October 8, at 11 A.M. at Liberty Baptist Church, 5001 Jackman Rd., where Roy was a member. His service will be officiated by the Reverend Rick Rust. He will be laid to rest in Toledo Memorial Cemetery. Those planning an expression of sympathy are asked to consider Hospice of Northwest Ohio, The Wounded Warrior Project, Liberty Baptist Church or charity of donor’s choice.

Roy W. Beeler passed into the presence of the Lord October 4, 2014 at Hospice of Northwest Ohio. He was born to Byron and Ora (Clayton) Beeler in Lawrenceburg, Tennessee, December 12, 1921. He was 92 years old. He was a World War II Army... View Obituary & Service Information

The family of Roy W Beeler created this Life Tributes page to make it easy to share your memories.

Roy W. Beeler passed into the presence of the Lord October 4,...