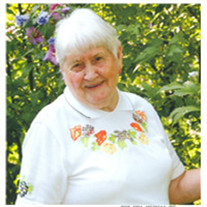 Ruby Roach passed away April 11, 2010 at Hospice of Northwest Ohio. She was born August 7, 1920 in Keota, Oklahoma to Effie and Jack Brigance. She married Fred Roach on January 1, 1941, and together they had four children, Robert, Brenda, Beverly, and Betty. They lived in Waldron, Arkansas before moving to Toledo in the 1950's. In addition to a homemaker, she was a cook at Dolly and Joe's restaurant for many years. Later, she prepared evening meals for the Oblates at Saint Francis. She enjoyed working in her vegetable and flower gardens, quilting, playing bingo with her friends Marjorie and Grace, and traveling with her daughter Beverly. They traveled together throughout the U.S., and her favorite place was Suttons Bay, Michigan. She was especially devoted to helping her family. Ruby is survived by her daughter Beverly (Paul) Laubenthal, daughter in law Peggy Roach, sister Stella Butler, brother Fred Brigance, four grandchildren, 13 great grandchildren, and 1 great-great grandchild. She was preceded in death by her husband Fred, daughters Brenda Littrell and Betty Roach, son Robert Roach, sister Vergie Sanders, and brothers Omer Brigance and John Brigance. The family will be receiving friends on Thursday, April 15, 2010 from 11:00AM to 1:00 PM in the Ansberg West Funeral Home, 3000 West Sylvania Ave. where services will begin at 1:00PM with internment to follow in Ottawa Hills Memorial Park. Those wishing to give memorials are asked to consider the Music Therapy Program at Hospice of Northwest Ohio, 30000 East River Road, Perrysburg, OH 43609, or Books and Music for Adult Day Care Centers at the Alzheimers Association, 2500 N. Reynolds Rd., Toledo, OH 43615. Heartfelt thanks are given to Ana Rodrigues-Leffler for her loving care and support, Heartland of Waterville, and Hospice of Northwest Ohio.

Ruby Roach passed away April 11, 2010 at Hospice of Northwest Ohio. She was born August 7, 1920 in Keota, Oklahoma to Effie and Jack Brigance. She married Fred Roach on January 1, 1941, and together they had four children, Robert, Brenda, Beverly,... View Obituary & Service Information

The family of Ruby F. Roach created this Life Tributes page to make it easy to share your memories.